Emma Raducanu came back from 2-0 down to win opening set 6-2 in Monday evening’s US Open fourth-round clash against Shelby Rogers and then played another set of lights-out tennis to secure a 6-2 6-1 win over the American world No 43; the teenager faces Belinda Bencic in the quarter-finals

Emma Raducanu was “really proud” of the way she settled against Shelby Rogers and shook off her early nerves to win their fourth-round contest at the US Open.

The start of the encounter between the British teenager and the world No 43 was not a straightforward one for the 18-year-old.

With Raducanu, who came through qualifying, playing inside the Arthur Ashe Stadium for the first time, her more experienced American opponent stormed out of the blocks and left the teen in her wake.

Since her opening match of the main draw, Raducanu had displayed unwavering confidence on her US Open tournament debut. Her ability to soak up her opponents’ power and return the ball with interest had belied her young age.

However, in the initial moments of Monday’s fourth-round tie, the concern was that perhaps this was the match in which a more experienced player would put her off her stride early on, and the Arthur Ashe stage would become a little daunting.

When Raducanu went 0-2 15-40 down, short intakes of breath were being taken by British fans around the world. However, they shouldn’t have worried about this courageous 18-year-old.

Instead, she focused in on her serve, played the game stroke-by-stroke, and did not let the contest run away from her. Not only did Raducanu hold, but she then instantly broke back and showed the belief she has in herself by attacking anything Rogers handed to her.

In particular, Raducanu’s ability to take the ball out of the air and nail forehand drive-volleys displays the belief she has in herself. It’s a shot she has produced time and again at Flushing Meadows, and it’s one that takes skill, courage and even greater levels of bravery when the stakes are high.

From a position of 2-2 in the opening set, Raducanu turned the screw and, in a flash, Rogers had lost it and was left wondering what had just happened.

“To play on Ashe for the first time, it was a little bit of a nervy experience in the beginning,” the 18-year-old said, after her 6-2 6-1 victory.

“I was really proud of myself, how I managed to settle and regroup and find a level that at the end took me to the win.” 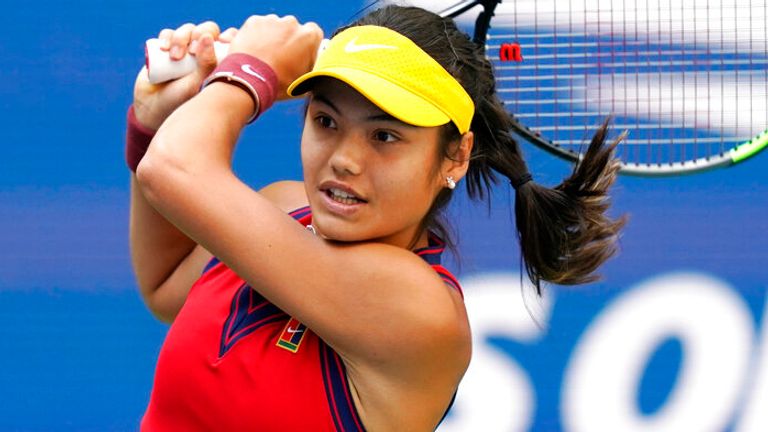 I was really trying to enjoy the moment. It’s something that you dream of, to play on Ashe, the biggest court in the world. I really didn’t expect to be here so soon. I just really wanted to be in the present.

Raducanu is a focused tennis player – when she’s on court, she just gets on with it. The 18-year-old doesn’t dilly-dally between points, she plays at pace and when she’s on top in matches, it means that her opponents don’t have time to contemplate what is happening to them.

Sara Sorribes Tormo and Zhang Shuai can both testify to exactly how challenging it is to be on the receiving end of Raducanu’s tempo and the British teenager will be looking to deliver that tempo again in the quarter-finals.

“I’m feeling very confident and happy with how I’m performing out here in the States,” she added.

“I feel like I’m building with each match. I’m really excited to see what I can do on Wednesday.”

Belinda Bencic will be Raducanu’s next opponent. Bencic, like Raducanu, has not yet dropped a set at this year’s major and overcame her own level of adversity in the fourth round too.

The recent gold medallist at the Olympic Games was pushed into a lengthy tie-break with Iga Swiatek in the opening set of their encounter.

The 24-point tie-break concluded an 84-minute first set and Bencic’s 14-12 victory in that tie-break helped give her the belief that she could take the second set and the match.

Flushing Meadows is where Bencic has enjoyed success before – she was a semi-finalist two years ago and also made the quarter-finals back in 2014.

“I’m definitely learning how it is to be in the second week, how to manage these quarter-finals, semi-finals,” she said. “I also feel the Olympics helped me a lot in this.

“I played big matches there, as well, and I kind of know now how it feels to go deep in a tournament, and an important tournament. It definitely feels good.”

World No 23 Emma Raducanu seals her first WTA Tour win, having lost in the opening