Dan Evans gave his all but Daniil Medvedev proved too good to set up a quarter-final meeting with surprise package Botic Van de Zandschulp; the British No 1 is likely to hit a new career-high ranking after equalling his best performance at a Grand Slam

Russia’s Medvedev is yet to drop a set in New York as he swept past Evans on Arthur Ashe Stadium 6-3 6-4 6-3 in the first career meeting between the two.

On court afterwards, Medvedev said: “I liked my serve better, but there was one forehand that was the best shot of the match.

“I played a few matches after that final but the first time I came back, it was without the fans, but still some memories.

“Now I want to make it to the final again and make some more memories.”

Evans, playing in the fourth round of a Slam for only the second time, is set to hit a new career-high ranking inside the top 25 by virtue of his run. 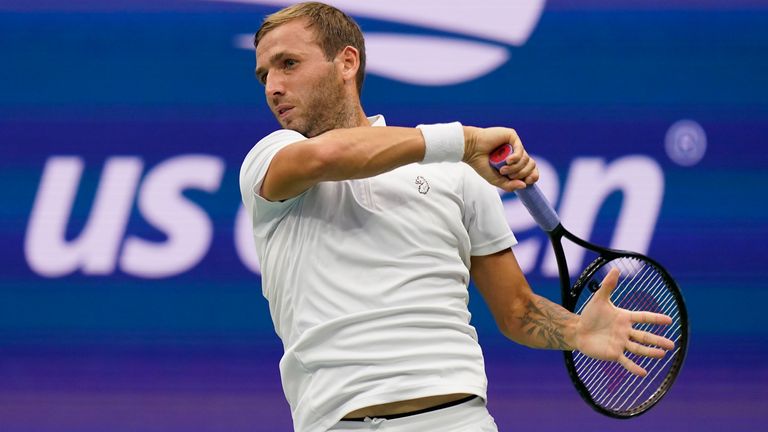 “I got a good, healthy lesson out there and just move on. It’s just a tough match. Some people are better than you, and that’s it really”

He has battled hard in New York after a debilitating bout of coronavirus forced him to miss the Olympics and left him struggling physically.

Evans has played two four-setters and pulled out of the men’s doubles with a groin issue. He then went through a gruelling five-setter against Australia’s Alexei Popyrin in his last match to make the second week at a major for just the second time in his career, but Medvedev was a step up in class.

Having cruised through his first three matches, Medvedev put on a serving masterclass, winning 84 per cent of his first-serve points, hitting 42 winners, including 13 aces to dispatch Evans and set up a quarter-final clash against Botic Van de Zandschulp.

Already a set and a break down, Evans forced a break point at 2-3 and with a rare look at the Medvedev second serve, he managed to level the set.

However, he immediately handed the initiative back with a pair of double faults gifting Medvedev the break again.

There was another shot for the Medvedev highlight reel when he sent a return around the net post which clipped the line.

An early break in the third then put Medvedev in complete control and he sent Evans packing with a hold to love.

“Yeah, it’s been a good week. It was difficult. Some difficult matches. Always not easy to lose,” Evans said.

“It was a solid, solid week. I’m happy with how I dealt with the conditions. The whole trip in itself was difficult. I played my best tennis this week, which is pleasing. Hopefully there’s a bit more left for the rest of the season.”

Qualifier Van de Zandschulp caused a major shock when he stunned 11th seed Diego Schwartzman to reach the last eight at a major for the first time.

Van de Zandschulp said on court: “I don’t really have words for it. I played so many matches here, some of them from the brink of defeat, but I pulled through every match.

“For the first time in the tournament, I won the first set. Even the first two – and I still almost ended up losing the match.”

Who Is David Vogel? About ‘The Voice’ Season 21 Singer – Hollywood Life

Who Is David Vogel? About ‘The Voice’ Season 21 Singer – Hollywood Life ad