David Warner was named player of the tournament after hitting his third half-century of the T20 World Cup in the final against New Zealand in Dubai; Australia triumphed by eight wickets to secure the trophy for the first time.

David Warner says Australia’s maiden T20 World Cup success against New Zealand ranks on a par with their triumph in the 50-over version back in 2015.

Warner, who was named player of the tournament, was one of six Australia players to feature in both sides, although he and Steve Smith were the only survivors from their only previous T20 World Cup final appearance in 2010, when England beat them to lift the trophy.

The 35-year-old opener had come in for criticism after a run of low scores going into the tournament – but he delivered the perfect response by amassing 289 runs in seven games, second only to Pakistan captain Babar Azam in the list of leading run-scorers.

Warner, whose innings of 53 from 38 balls provided Australia with the perfect platform to chase down their target of 173 against the Black Caps in Sunday’s final in Dubai, said: “This is definitely up there with 2015. 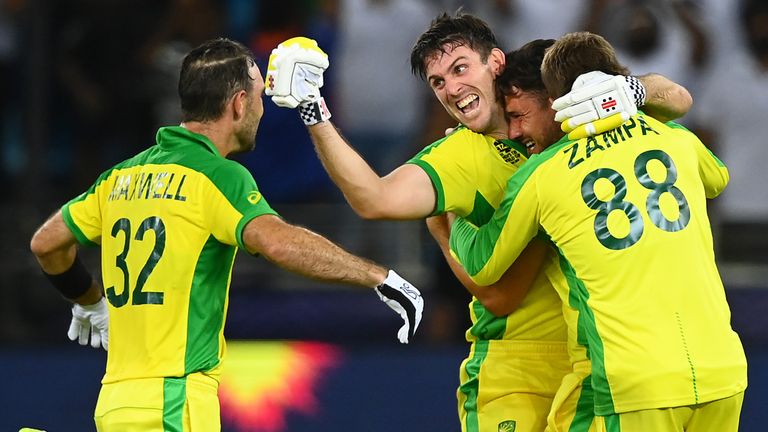 “Being part of the T20 World Cup final against England a decade ago really hurt, although obviously our women’s team won then as well so we felt a part of that.

“These guys are a great bunch and we’ve got a great support staff, as well as great support around the world and especially at home.

“We just wanted to put on a great spectacle for everyone, at the venue and at home, and we were able to deliver it. There was a bit of nerves with a good total on the board, but it was just great to see the guys deliver.

“In the two practice matches I didn’t get much time in the middle, but it was just about going back to basics and getting on some hard synthetic wickets to train and hit some balls and I managed to get out here and score some runs.”

Warner notched three half-centuries in the tournament, scoring 65 against Sri Lanka and an unbeaten 89 in the win over the West Indies to seal Australia’s place in the semi-finals, where he added 49 in their five-wicket victory over Pakistan.

The left-hander continued that form in the final, sharing a second-wicket partnership of 92 from 59 with Mitchell Marsh, who went on to propel Australia over the line alongside Glenn Maxwell with seven balls to spare.

Australia skipper Aaron Finch, who is also Warner’s opening partner, reflected: “He was outstanding. I can’t believe people wrote him off a few weeks ago, saying he was done.

“That’s when he plays his best cricket, it was almost like poking a bear! We had some great individual and team performances and it was fantastic.

“This is huge, to be the first Australian team to be able to do it. I’m so proud of the way the guys went about the whole campaign.

“We knew our backs were against the wall [after defeat to England in the Super 12s]. I think if you keep putting people’s backs against the wall enough, you’re going to fight and we certainly did that.”

Australia coach Justin Langer, whose side had lost five consecutive T20I series prior to the tournament, felt the positive atmosphere around the camp provided the basis for victory in Dubai.

He said: “We haven’t had a chance to play together for different reasons over the last 12 months so, when we did get back together, it was almost like a reunion.

“There are so many close relationships there, it’s a very special moment for everyone. We knew when we came back together how much talent we had.

“When we were in the West Indies and Bangladesh leading into this series, there were a few missing pieces and Mitch Marsh took one of those pieces – he’s been brilliant.

“We also embraced fun – in these situations where everyone talks about bubbles, these guys have had so much fun on and off the ground. That’s important in the game of cricket and I think it was a really important part of our success.”