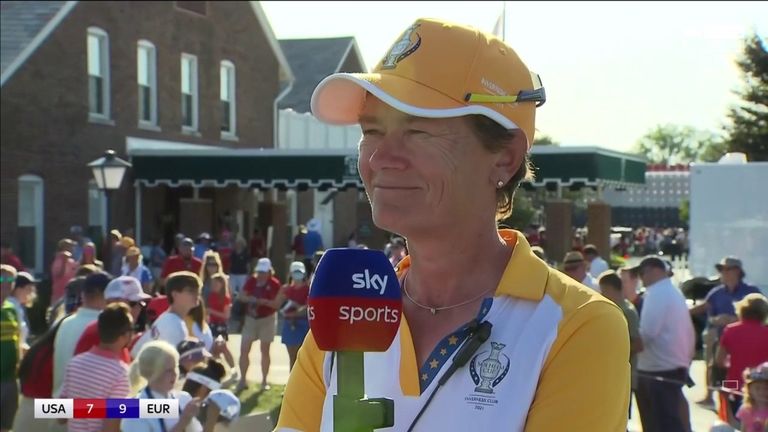 Team Europe captain Catriona Matthew believes her team will be buoyed by their strong finish to Sunday’s fourballs when they tee up in Monday’s Solheim Cup singles.

Matthew’s side led 6.5-5.5 after the morning foursomes and looked set to lose their lead in the afternoon with the Americans ahead in three of the matches and tied in the other at one stage.

However, Charley Hull and Emily Pedersen pulled clear to defeat Austin Ernst and Danielle Kang 3&2, while Carlota Ciganda and Nanna Koerstz Madsen rallied from one down to beat Jessica Korda and Megan Khang 1up.

Rookie USA duo Yealimi Noh and Mina Harigae held firm to see off Sophia Popov and Celine Boutier 3&1 in the top match, but the real drama came in the third match.

Jennifer Kupcho, playing with Lizette Salas chipped in at the 17th, to put the USA one up against Mel Reid and Leona Maguire, but the European duo hit back at the 18th as Reid’s superb approach, which cleared a bunker by inches, set up a tap-in birdie and the match was halved.

“I thought they did really well today,” said Matthew. “It was in a way slightly tough coming in with a three-point lead. We knew the Americans were going to come back fighting at us. We knew it was going to be close.

“We had a slightly disappointing morning, and then to come back like we did in the afternoon, because at one point it was kind of very much the Americans had the momentum, and around about the turn you could sense it was changing a little bit and going toward Europe and you weren’t hearing quite so many cheers.

“The finish with Mel and Leona was fantastic and has really buoyed us up going into the singles tomorrow.

“Obviously you all want to have fun while you do it, and I think we’ve all gelled well together as a team, the whole kind of captains, helpers, caddies, players. 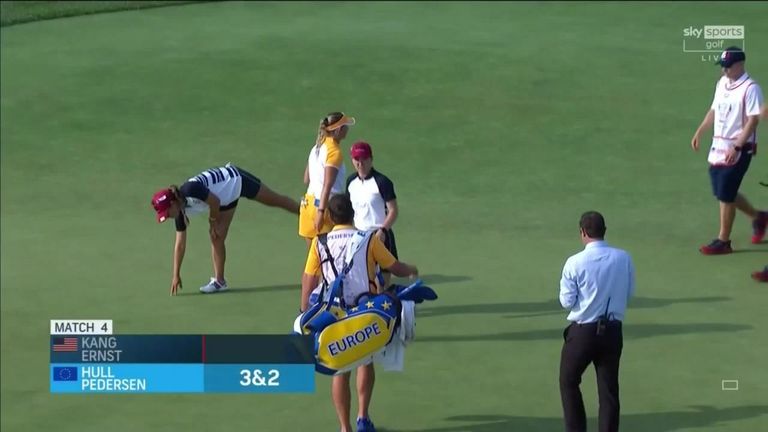 “You know, we’re having fun, but we’re certainly wanting to go out there and win tomorrow.”

Reid, who played down a neck issue which had troubled her during the match, also feels the half-point could be vital.

“I think it’s difficult to not look at leaderboards,” she said. “It was very red there for a minute, so to turn it around and have the afternoon that we did, have a two-point lead is an incredible result for us. They came out firing this morning. They were obviously very pumped up from that. 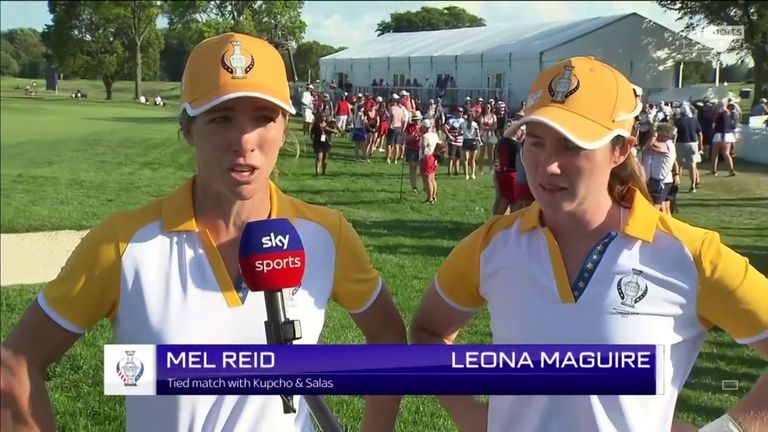 “The crowd were getting behind them, heckling us a little bit. Whatever, some of it was funny, some of it wasn’t. Whenever they came up with more original stuff. But obviously to go in with a two-point lead is huge. Getting that halve was huge.”

“I feel pretty strong about our team and about our line-up. We’re looking forward to that, and just looking to go out and make as many points as we can and hopefully get on the board early and keep it going,” she said.