Valtteri Bottas won the F1 Sprint for Mercedes to deny Max Verstappen the full points haul and pole position for Sunday’s Sao Paulo GP, as Lewis Hamilton sensationally charged back from last to fifth place to cap an extraordinary Saturday at Interlagos.

Verstappen increased his championship lead over Hamilton to 21 points by finishing second from first on the grid but the big winner of the mini race was arguably his British rival, who overtook 15 cars in the space of 24 laps as part of a stirring comeback drive through the field after his earlier disqualification from the qualifying results on technical grounds had left him at the back.

Due to a further penalty for an engine change this weekend, Hamilton will drop back five places to 10th for tomorrow’s main starting grid – but is firmly back in the fight for the leading positions on the evidence of Saturday.

The results of the sprint, once penalties are factored in, set the grid for the 71-lap race, which is now set up thrillingly given the comeback pace of Hamilton and his Mercedes.

“What a drive from Lewis Hamilton! What’s he going to do over 71 laps tomorrow?” asked a stunned Martin Brundle in the Sky Sports F1 commentary box.

“Hamilton will start tomorrow’s race 10 positions higher up, and the race is three times longer. He can win it from there.”

Choosing to start the sprint on the more durable medium tyres, Verstappen immediately lost the lead at the start to a soft-shod Bottas – and then dropped to third behind Ferrari’s fast-starting Carlos Sainz after running wide under braking on the opening run down the back straight.

Verstappen soon overtook the Ferrari to move back into second but could not reel in Bottas over the remaining laps, with the Finn impressively keeping his soft tyres in good condition despite the looming threat of Red Bull’s Dutchman.

Red Bull lost another position from the starting grid with Sergio Perez, who could not re-pass the impressive Sainz and so finished outside the points on offer for the sprint in fourth.

It means Mercedes actually increase their slender Constructors’ Championship advantage over Red Bull to two points ahead of the Grand Prix. By finishing third for the final point, Sainz moves Ferrari slightly further clear of McLaren. 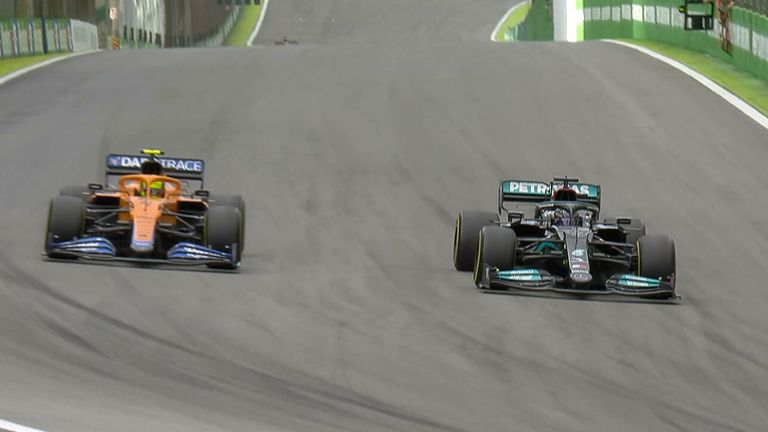 Hamilton’s final overtake was arguably the best of the lot as he swept down the inside of McLaren’s Lando Norris into Turn One on the final tour for fifth place.

From 20th to fifth: Hamilton’s surge puts him back in Brazil contention

Whether by sheer coincidence or not, the three experimental F1 Sprint weekends that the sport’s chiefs have introduced for this year have each served up huge drama amid a season hardly lacking in a gripping narrative.

The events of Friday night into Saturday in Brazil had been barely believable, with both of the title contenders placed under investigations by stewards with the outcomes not determined until the hours before Saturday’s evening sprint.

Relegated from what would have been the head of the grid to the back of the pack, and with another smaller grid drop to come on Sunday, Hamilton’s title hopes seemed to have suffered a possible hammer blow.

But what followed changed from lights out to the chequered change all of that as Hamilton made light of his lowly starting position to scythe his way through the backmarkers and into the midfield with stunning speed and overtaking accuracy.

“Lewis’ straight-line speed is just mind-boggling. That was in just a different league,” commented Red Bull boss Christian Horner to Sky F1 after the race.

Picking off drivers on an almost a lap-by-lap basis on the long, curved run to Interlagos’ first corner, Hamilton was into the top 10 inside 12 laps and then diligently overtook Sebastian Vettel, Esteban Ocon, Pierre Gasly and Charles Leclerc with little delay.

He then capped the comeback with a brilliant late dive on Norris for fifth. Incredibly, Hamilton finished just two seconds behind Sainz and a point. 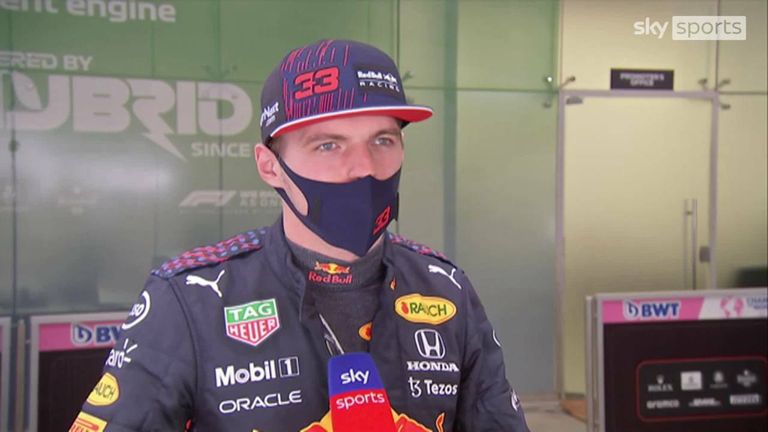 Already starting in a points position on Sunday despite his penalty, the seven-time world champion appears to have the speed and the form to have his sights realistically set on rather more than by the end of the weekend’s 71-lap main event.