Brooks Koepka said in a Golf Digest interview earlier this month that team sports were “not in his DNA”. His reply ahead of the Ryder Cup: “I never said it was negative. Y’all spun it that way. I said it was different”

Brooks Koepka has hit out at the media for how his comments about the Ryder Cup were reported and insisted he was looking forward to representing Team USA this week.

Koepka claimed in a Golf Digest interview earlier this month that team sports were “not in his DNA” and that the biennial contest threw off his regular tournament routine, leading to accusations that he did not care about the contest.

Former USA captain Paul Azinger said Koepka should give up his spot if he did not love the event, although Koepka insisted that his comments had been misrepresented by the golfing press.

“It’s a lot of fun to play. I wouldn’t be nervous on the first tee if I didn’t care. I can only do my job and then y’all report whatever your opinion or side might be.

“You guys have kind of already spun it negatively, so it is going to trickle to the fans because you guys are kind of our only outlet besides social media. It’s how you guys take it and spin it. Whatever they think is kind of off what they read, whether you write an article, whatever you’re doing. They read that stuff. It’s all kind of your guys’ opinion, they are going to take that side a little bit more.”

Bryson DeChambeau played down any feud with the four-time major champion in his pre-tournament press conference and sent social media into a frenzy when he hinted that ‘something special’ could happen between the pair, although Koepka failed to confirm that suggestion. 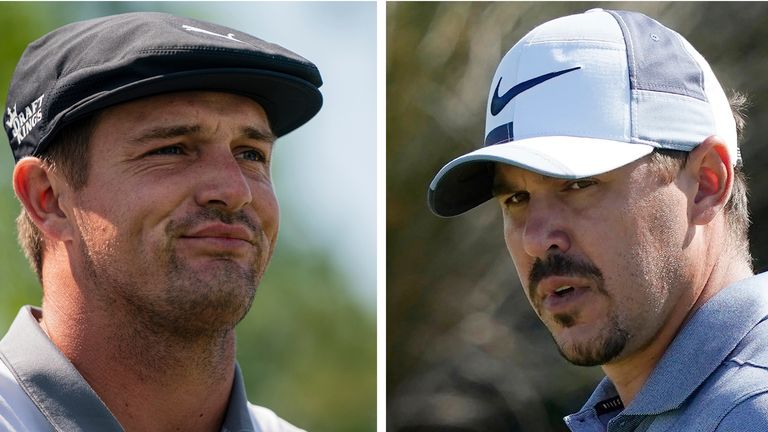 Team USA captain Steve Stricker says the ongoing feud between Brooks Koepka and Bryson DeChambeau will not be an issue, but admits they may not be paired together for the Ryder Cup

Team USA captain Steve Stricker says the ongoing feud between Brooks Koepka and Bryson DeChambeau will not be an issue, but admits they may not be paired together for the Ryder Cup

“I didn’t listen to the comments or hear what he said, so I have no idea,” Koepka added.

When asked about his relationship with DeChambeau, Koepka said: “We are on the same team together. We’ve had dinner almost every night as a team. I got here on Monday. Everyone who is on our team is interacting and everybody is participating in conversations and doing everything we need to do.”

This year’s contest is being held in USA captain Steve Stricker’s home state of Wisconsin, with Koepka hoping to see the 54-year-old – known for showing his emotion – to be crying for the right reasons on Sunday.

“It would be nice to see him cry,” Koepka said. “That would be awesome just because I know how much time he has put in. It’s at least 18 months of hard work, growing up in Wisconsin, there are a lot of things coming together which would be the perfect storm if we were to win and I think everyone knows that.”

Who will win the 43rd Ryder Cup? Watch throughout the week live on Sky Sports’ dedicated Ryder Cup channel. Live coverage of the Foursomes begins on Friday from 1pm on Sky Sports Ryder Cup.