San Francisco 49ers running back Raheem Mostert has been placed on injured reserve and is expected to be sidelined for around eight weeks after chipping cartilage in his knee during Sunday’s win over the Detroit Lions.

Mostert fell victim to an injury-stricken season for the 49ers in 2020 when he was limited to eight games, during which he posted 521 yards rushing for two touchdowns off 104 carries.

It followed up a long-awaited breakout campaign in 2019 that saw him lead Kyle Shanahan’s side with 772 yards and eight touchdowns from 137 carries on the ground on the road to the Super Bowl having previously been cut by six teams since going undrafted in 2015.

The 49ers’ ever-dangerous running game coped well in his absence as sixth-round rookie Eli Mitchell finished with 104 yards and one touchdown from 19 carries while 2020 undrafted free agent JaMycal Hasty also made a trip to the end zone. 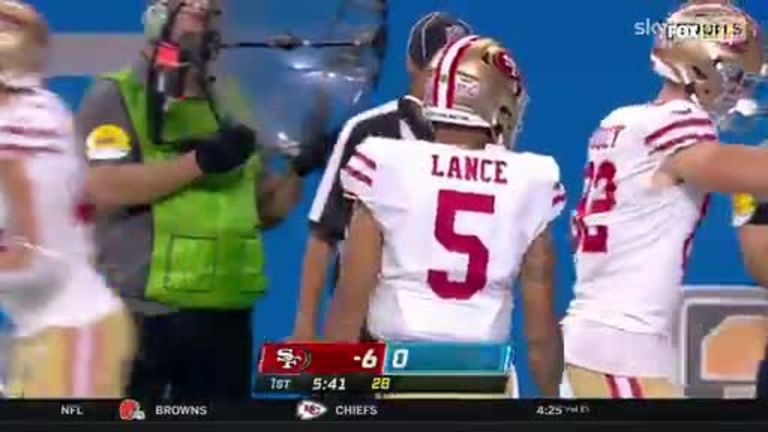 Rookie Trey Lance with his first Touchdown pass in the NFL

Rookie Trey Lance with his first Touchdown pass in the NFL

Third-round rookie Trey Sermon is expected to play a prominent role having been inactive in Sunday’s season opener, while the 49ers still have Jeff Wilson to welcome back from injured reserve.

The injuries, unfortunately, didn’t stop there for San Francisco, though, who also lost starting cornerback Jason Verrett for the rest of the season after the 2014 first-round pick suffered a torn ACL in his right knee.

Fitzpatrick out for extended spell

Elsewhere, Washington starting quarterback Ryan Fitzpatrick has also been placed on injured reserve and faces a lengthy spell out of action after an MRI confirmed he had sustained a hip subluxation in Sunday’s defeat to the Los Angeles Chargers.

The 38-year-old required assistance getting off the field on the back of a hit by Chargers edge rusher Uchenna Nwosu midway through the second quarter.

Taylor Heinicke, who starred in last season’s playoff loss to the Tampa Bay Buccaneers, subsequently replaced Fitzpatrick under center and now looks set to start against the New York Giants on Thursday night. Kyle Allen will meanwhile serve as his backup.

Fitzpatrick signed a one-year deal with Washington in March after losing his starting spot with the Miami Dolphins to Tua Tagovailoa.