Stan Kroenke, who owns the club through his Kroenke Sports and Entertainment business, rejected the offer but Henry said last month that Ek remains fully committed to buying Arsenal and “we and he is here to stay”.

Former Arsenal captain Vieira was subsequently appointed Crystal Palace manager in July and is set to make an emotional return to north London on Monday night, live on Sky Sports.

“I was just expressing myself as Patrick, ex-Arsenal football player,” Vieira said when asked about his support for Ek’s takeover plans.

“That comment was based on how the direction (of the club) was going.

“I was talking to somebody who had a different view and a different way of taking (forward) Arsenal Football Club.

“This was the reason why with Dennis and Thierry were involved in the kind of situation that Arsenal was in.

“I am in a different position than a couple of months ago. So I’m not going to express myself in the same way than when I was just an ex-Arsenal football player.” 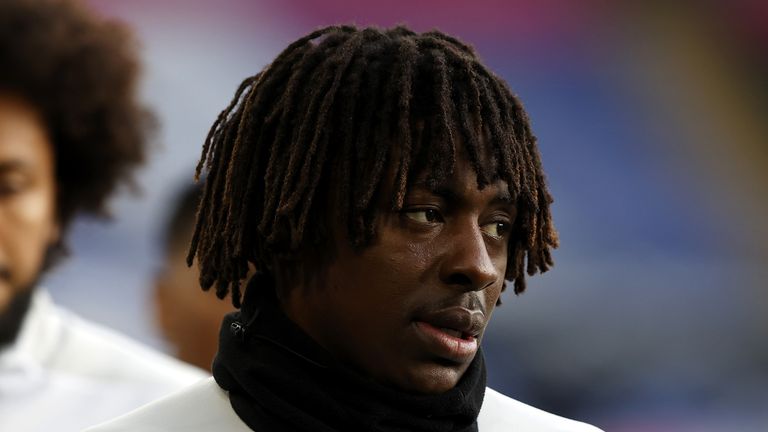 Vieira confirmed Eberechi Eze is back in training with the squad but won’t be rushed back after a lengthy injury.

Henry confirmed in September there was “no dialogue” between the Kroenke family and Ek over a potential change of ownership at Arsenal.

But Henry, Arsenal’s record goalscorer, indicated the deal was not dead, saying: “It hasn’t happened yet, but we and he is here to stay. So let’s see what’s going to happen.”

However, Vieira said: “​When you were looking at the situation at the time it was clear that the Kroenke family was making the statement that the club is not for sale.

“Then I think everything was over. You can’t buy a football club if it is not for sale.”

Vieira returns to Arsenal for the first time as a manager nearly six years after beginning his senior managerial career at MLS side New York City.

The 45-year-old has also managed at Nice in France’s Ligue 1.

“Going back from my Manchester City time (as Elite Development Squad manager) and where I am today it has been up and down,” Vieira said. “But overall I am really pleased about the journey I’ve had so far.

“What I really wanted was to come back to the Premier League to manage and I’m really lucky to be in a good football club.

“There is the foundation to express myself as a manager and I want to grow with the football club.

“This football club is really ambitious, as I am as a manager, and both of us can achieve good things here.

“The club want to be bigger and challenge for bigger things, and we are in a process of developing something quite interesting.”