Ian Baraclough’s side won 4-1 when the teams met in September but their qualification campaign tailed off with back-to-back defeats to Switzerland and Bulgaria ending their hopes of a play-off place.

This fixture was all about playing for pride and gaining some momentum and Baraclough got the desired response as Benas Satkus’ unfortunate own goal on 17 minutes was enough for victory.

It was a fully-deserved win for Northern Ireland following a highly-energetic and committed display where Ali McCann and Josh Magennis had goals ruled out for marginal referee decisions.

The result lifts Northern Ireland into third place in Group C on goal difference with a final-day clash with Italy to come on Monday night at Windsor Park.

How Northern Ireland got job done in first half…

Baraclough needed a response after the October window brought the disappointment of seeing their World Cup hopes ended by the Swiss, compounded by a poor defeat in Bulgaria, and he got it in the opening 45 minutes.

Shane Ferguson, preferred to Jamal Lewis on the left, delivered a series of dangerous balls, one swatted away unconvincingly by Ernestas Setkus before Magennis’ glancing header went narrowly wide from another.

The brilliant Steven Davis, earning his 131st cap, combined well with Stuart Dallas and McCann in a sweeping move which saw McCann square the ball for Conor Washington, but his first-time shot was well saved by the Lithuania goalkeeper.

The reward came in the 17th minute as Satkus got his angles wrong trying to defend Paddy McNair’s inswinging corner and headed backwards into his own net.

Moments later, McCann thought he had his first competitive goal for Northern Ireland, but his strike was ruled out with Magennis offside as he was deemed to have blocked Setkus’ view. VAR reviewed the decision but decided to stay with the assistant referee’s decision.

Lithuania tried to muster a response, threatening when Justas Lasickas raced through on Bailey Peacock-Farrell, who blocked the shot but saw the ball bounce up off Lasickas before going harmlessly wide.

Northern Ireland had the ball in the net for a third time four minutes before the break, but Magennis’ header was ruled out for a push on Ovidijus Verbickas.

It was a slower start to the second half with Northern Ireland sinking a little deeper to protect their lead.

Magennis and Washington remained a threat with their direct running but clear-cut chances were hard to find. That sparked Baraclough with 13 minutes left, to give the exciting 17-year-old Dale Taylor his debut in place of Magennis.

The Nottingham Forest striker was straight into the action as he won a corner for his side from which Washington nodded narrowly wide.

What the manager said…

Northern Ireland boss Ian Baraclough: “The first half was as good as we’ve played since I took the job. We were full of energy and moved the ball quickly to create two vs ones in wide areas. We got into some great positions. We should have gone in at half-time more than 1-0.

“We got a bit ragged in our passing during the second half and that meant it kept coming back at us, meaning it was a backs-to-the-wall second half. But I’m delighted to get a clean sheet and move on.” 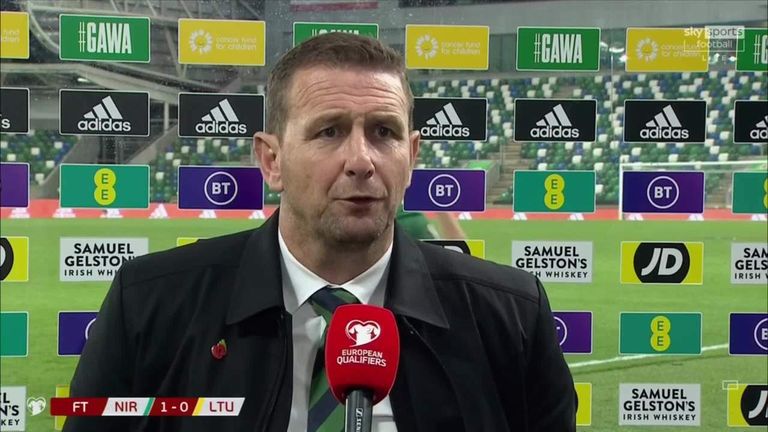 Northern Ireland boss Ian Baraclough was happy with his sides display that gave them a 1-0 win over Lithuania in their World Cup qualifier.

“It was excellent in the first half, the tempo dropped in the second half as chances were limited. But Northern Ireland managed the game well. Three points and a clean sheet. The only disappointment is they didn’t score more goals. It was an effervescent performance in the first half with good attitude and lots of quality.

“They deserved more goals – maybe even a three-goal cushion with the way they were playing. There was some really good football and clear-cut chances. From a manager’s point of view, if you are creating good-quality chances you are happy.

“It’s a performance that is good for the soul and confidence going into a monumental game on Monday against Italy, who have to win. It will be an exciting night.”

It does net get much tougher next up for Northern Ireland as they end their campaign with a home fixture against European champions Italy on Monday, kick-off at 7.45.