LeBron James, Antony Davis and Russell Westbrook were all on good form as the LA Lakers swept their back-to-back with the Houston Rockets but they were severely tested by a young team containing rookie Jaylen Green.

Game of the Night

The Lakers’ third consecutive win was not at all like their 95-85 triumph over the Rockets (1-6) in the opener of the two-game, same-site sequence on Sunday, a game in which the hosts never trailed over the final 45 minutes.

The rematch saw the Rockets, who tipped off on a four-game losing streak, lead by as many as 11 points early in the third period before the Lakers chipped away, seized the advantage and then held on despite a pair of late 3-pointers by Houston’s Jalen Green. Still down 97-92 with 10 minutes to play, the Lakers (4-4) took the lead for good during a 12-3 burst that saw James contribute a dunk, three layups and a short jumper.

Los Angeles’ Malik Monk made just one of two free throws with 6.6 seconds left, giving the Rockets a chance to tie or win with a 3-pointer. However, Kevin Porter Jr. was off the mark on a potential game-winning 26-footer, allowing the Lakers to hold on.

Performance of the Night James finished with game-highs of 30 points and 10 assists while Davis and Westbrook had 27 points apiece.

Davis and Westbrook each grabbed nine rebounds, and Westbrook added seven assists but the way LeBron ran the floor and threw down dunks, makes us our pick for player of the night. After scoring a team-high 23 points in the Sunday win, Carmelo Anthony chipped in with 15 off the bench for the Lakers, who totalled 26 points off 25 Houston turnovers.

Wood had a game-high 16 rebounds to go with a team-high 26 points for the Rockets, who lost despite shooting 52.7 percent.

Dunk of the Night Giannis Antetokounmpo can contort his incredible body in all sorts of ways. But if a defender, even a tall one such as Isaiah Stewart (6ft 9ins), stands in front of him outside the restricted area then it will be called as a charge if he just tries to barge through him.

Giannis being Giannis though, shows complete imagination and goes for the 360 spin before rattling the rim. Stunning play from the Greek Freak.

And it came as part of quite the performance from the two-time MVP. Antetokounmpo had 28 points, nine assists, eight rebounds and four blocks as the shorthanded Milwaukee Bucks continued their dominance of the host Detroit Pistons with a 117-89 rout on Tuesday night. Milwaukee has won 15 consecutive games against its Central Division opponent, including the postseason. 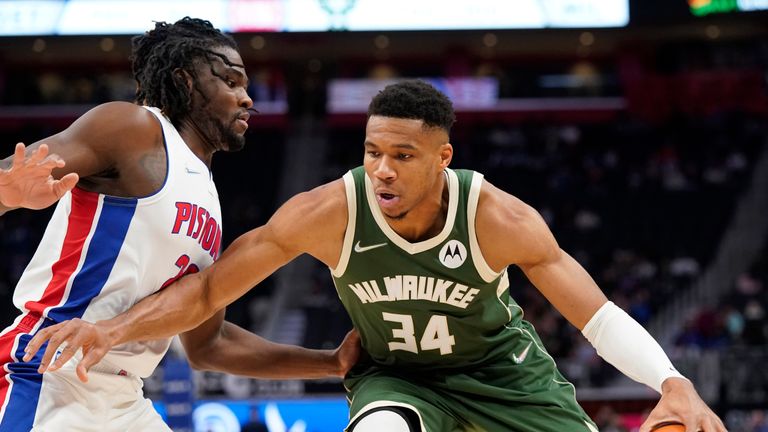 Highlights of the Bucks’ visit to the Pistons

The Bucks (5-3_ played without starters Khris Middleton, Jrue Holiday and Brook Lopez due to illness or injury. It didn’t matter, as Milwaukee took the lead early in the opening quarter and held it the rest of the way.

Jerami Grant led the Pistons (1-6), who have only one win this season, with 21 points. Trey Lyles added 13 points and seven rebounds off the bench. The top pick in the 2021 NBA Draft, Cade Cunningham, had a woeful shooting night for Detroit. He made just 2 of 14 shots from the field and went 0-for-9 on 3-point attempts to finish with just six points in 29 minutes.

Milestone of the Night Highlights of the New Orleans Pelicans’ visit to the Phoenix Suns

Chris Paul posted a double-double and reached a career milestone as the host Phoenix Suns (3-3) defeated the New Orleans Pelicans, 112-100.

Paul scored 12 of his 14 points in the fourth quarter and finished with 18 assists while passing Mark Jackson and former Sun Steve Nash to move into third place in the NBA’s all-time assist list. 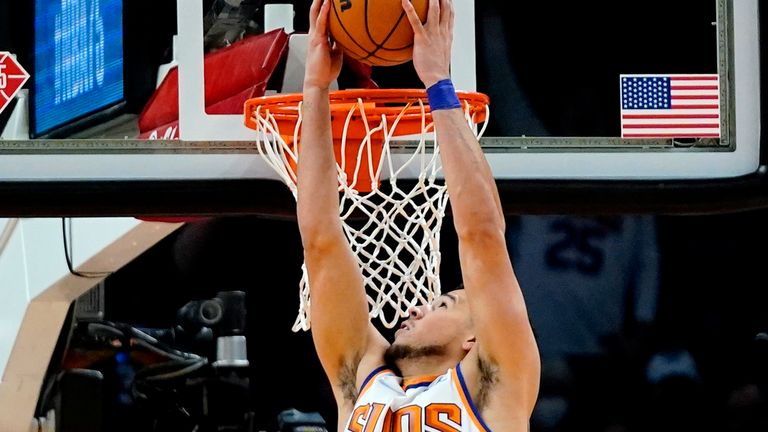 Mikal Bridges scored 22 points, JaVale McGee and Devin Booker had 18 each, Frank Kaminsky scored 17 and Jae Crowder added 13 for Phoenix. The Suns outscored the Pelicans 36-18 in the fourth quarter while earning their second consecutive victory.

Jonas Valanciunas had 23 points and 14 rebounds, Josh Hart scored 16, Devonte’ Graham added 12 and Nickeil Alexander-Walker 10 to lead the Pelicans (1-7), who were playing the first of four road games in seven days.

Donovan Mitchell scored 36 points, Mike Conley Jr. fired in 30 and the Utah Jazz (6-1) toughened up in the clutch to pull away from the Sacramento Kings for a 119-113 win Tuesday night in Salt Lake City.

Bojan Bogdanovic added 20 points while Rudy Gobert had another double-double with 20 rebounds and 12 points as the Jazz beat the Kings for the sixth straight time. It was also Utah’s sixth win in seven games overall this season. Highlights of the Sacramento Kings’ clash with the Utah Jazz

Harrison Barnes put up 23 points to lead the Kings (3-4), who had all five starters and two reserves score in double figures. Sacramento held a lead in the final five minutes after trailing for most of the first 3 1/2 quarters.

Conley gave Utah its biggest lead of the game, 100-91, with back-to-back 3-pointers early in the fourth quarter.

Buddy Hield, who scored 19 off the Kings’ bench, answered with consecutive 3-pointers to cut the deficit to three. Richaun Holmes gave Sacramento a 102-101 lead with 5:02 left, capping an 11-1 run.

Conley ended the Kings’ streak with his third trey of the quarter, and the Jazz took a 3-point lead with 4:05 left when Bogdanovic drained a deep shot following another Holmes bucket.

Gobert scored six points in the final 2 1/2 minutes as Utah extended its lead and held on for the victory.

Tyler Herro scored 25 points off the bench, leading the Miami Heat to their fifth straight win, a 125-110 victory over the host Dallas Mavericks on Tuesday night.

Heat make it five wins win a row against the Mavericks Highlights of the Miami Heat’s trip to the Dallas Mavericks

Herro had 15 of his points in the key second quarter, when the Heat took control of the game, and they never trailed again. The Heat (6-1) also got 23 points from Jimmy Butler.

Veteran point guard Kyle Lowry, in his first year with the Heat, had his best game of the season with 22 points and a game-high nine assists. He made 7 of 10 shots from the floor, including 6 of 9 from 3-point range. 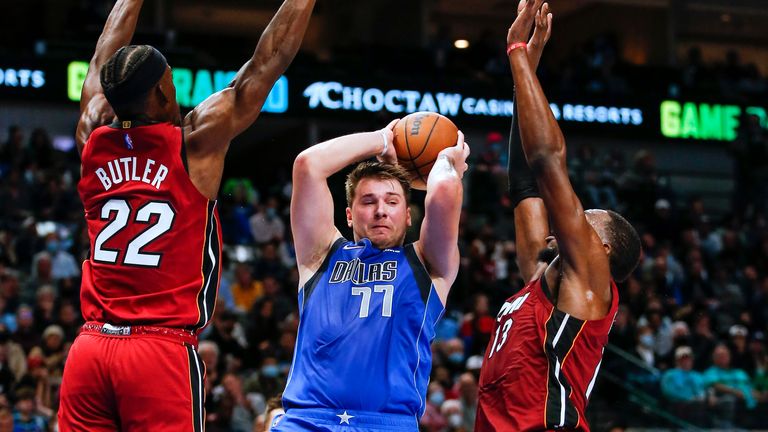 Luka Doncic led the Mavericks (4-3) with a game-high 33 points and a team-high five assists. Dallas also got 25 points from Jalen Brunson, 17 from Tim Hardaway Jr. and 10 from Reggie Bullock.

Bam Adebayo, who missed Miami’s previous game due to a bruised left knee, returned and produced 22 points and a game-high 13 rebounds.