Liam Livingstone says it was a “pleasure” to watch Jos Buttler’s 71 not out from 32 balls against Australia as England cantered to third straight victory at T20 World Cup with eight-wicket drubbing of Aaron Finch’s side; Livingstone also talks spin bowling and next game vs Sri Lanka 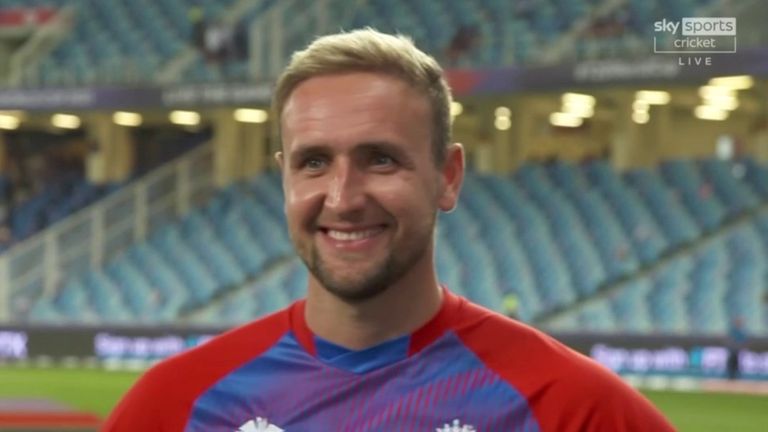 “Genius” Jos Buttler is the best white-ball hitter in the world, said England team-mate Liam Livingstone, after his brutal batting during the eight-wicket win over Australia in the T20 World Cup.

Buttler creamed five sixes and as many fours while striking an unbeaten 71 from just 32 deliveries as England topped Australia’s 125 all out with 50 balls to spare in Dubai on Saturday evening.

The 31-year-old’s pyrotechnics included monster back-to-back sixes off Mitchell Starc as he reached fifty from just 25 balls during England’s third consecutive victory in the tournament.

Livingstone told Sky Sports Cricket: “It was a pleasure to be sat there watching that Jos innings. It was phenomenal to see a genius at work.

“When he gets on a roll like that there is no stopping him. It was the perfect innings, a clinic of white-ball power-hitting and long may it continue.”

Buttler’s blistering knock, in which he passed 300 career sixes in T20 cricket, came after England’s bowlers had fired again, reducing Australia to 21-3 after the powerplay.

England razed defending champions West Indies for just 55 in their opening World Cup game and then limited Bangladesh to 124-9 in their second.

Livingstone, who bagged figures of 1-15 from four overs against Australia with his mix of leg and off-spin, said: “Our bowlers have been phenomenal throughout the tournament and we have great depth within our line-up.

“It is hard to hit that Test-match length from the seamers – Woakes’ length is perfect for these pitches. We have bowled that beautifully and backed it up as a spin unit.

“The way our batters have come down the pitch and tried to hit bowlers off their length is something teams haven’t quite done to us yet.”

Livingstone claimed 2-15 from three overs against Bangladesh and then dismissed Australia left-hander Matthew Wade – caught by Jason Roy on the long-on boundary – during his four overs on Saturday.

Livingstone added of his bowling: “I have done it for a few years now and worked really hard on it for moments like this – to be able to spin the ball away from the bat when teams are under pressure is a great thing to have.

“I have done loads of work on my lengths with Jeets [England spin-bowling coach Jeetan Patel].

“It’s been about trying to change me as a bowler to try and hit a much better length and not miss full. Thankfully that hard work is starting to pay off and I have done that this tournament.

“I learn so much from Mo [Moeen Ali] and Rash [Adil Rashid].

“An off-spinner and a leg-spinner that have probably been two of the best in the world for many years now.

“I get to learn off them which is pretty cool for me. I am pretty blessed to learn the art of spin to go along with my batting.”

On Monday’s clash with Sri Lanka in Sharjah, in which a win will secure England a semi-final spot, Livingstone said: “We have said that every pitch is so different and Sharjah will be completely different.

“Different bounce, much slower. We will have to assess the conditions as quickly as we can and get down to work.”