Jaren Jackson Jr. scored 11 of his season-high 22 points in the fourth quarter as the Memphis Grizzlies recorded their second consecutive win over the visiting Nuggets, beating Denver 108-106 on Wednesday night.

Jackson made five three-pointers and grabbed eight rebounds for Memphis, who escaped with the win after Nikola Jokic’s 11-foot jump shot hit the front rim at the buzzer.

Jokic put up a season-high 34 points while adding 11 rebounds for Denver, who lost 106-97 in Memphis on Monday night. Will Barton also scored a season-high 26 points. 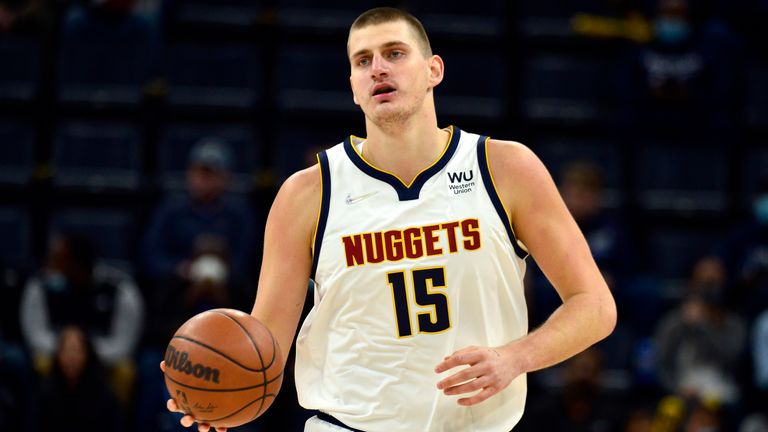 Nikola Jokic dropped 34 points, 11 rebounds and 5 assists in the Nuggets narrow loss to the Grizzlies.

Denver guard Monte Morris was 2-for-11 from the field before his midrange jumper tied the game at 102 with 3:30 left to play. After the teams exchanged baskets, Bane hit a three-pointer to put Memphis ahead 107-104 with 1:20 remaining.

Jokic scored at the rim with 22.4 seconds left to pull Denver within 107-106, and the Nuggets sent Morant to the foul line with 10.6 seconds to play.

Morant, who missed five of his seven free throws for the game, made one of his two shots to put Memphis ahead 108-106 and earn the win after Jokic’s miss. 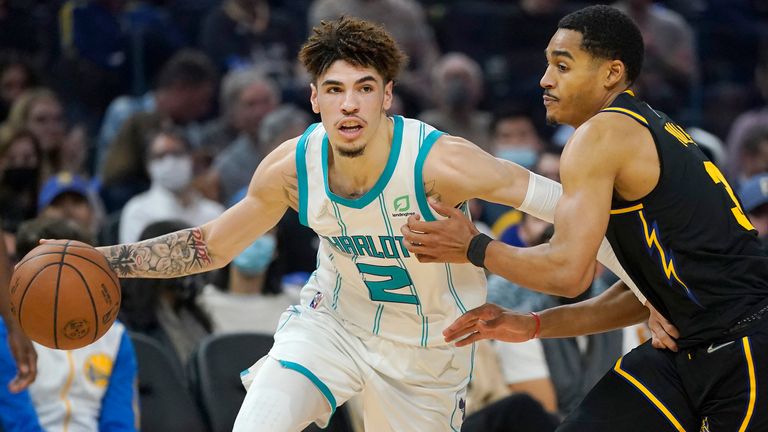 Jordan Poole picked up the slack on an off shooting game for backcourt mate Stephen Curry, scoring a season-best 31 points and helping the Golden State Warriors overpower the visiting Charlotte Hornets 114-92.

Gary Payton II came off the bench to chip in with a season-high scoring total of his own, contributing 14 points and three steals to the Warriors’ sixth win in seven games to start the season.

Miles Bridges poured in a game-high 32 points for the Hornets, who lost consecutive games for the first time this season. Jordan Poole and Gary Payton II score career-highs on an off-night for Stephen Curry to beat the Hornets at home.

Charlotte led by as many as seven in the first half but Golden State chipped away to carry a 53-52 lead into the break. The Warriors then took command with a late burst in the third period that opened an 80-64 lead. Payton had two layups, two free throws and a steal in a 14-1, defensive-driven flurry that gave the Warriors a comfortable lead for good.

On a night when he had eight rebounds and a game-high nine assists, Curry finished with 15 points on 6-for-15 shooting.

He missed eight of his 11 three-point attempts and finished with his lowest-scoring total of the season, five points below his previous worst of 20. 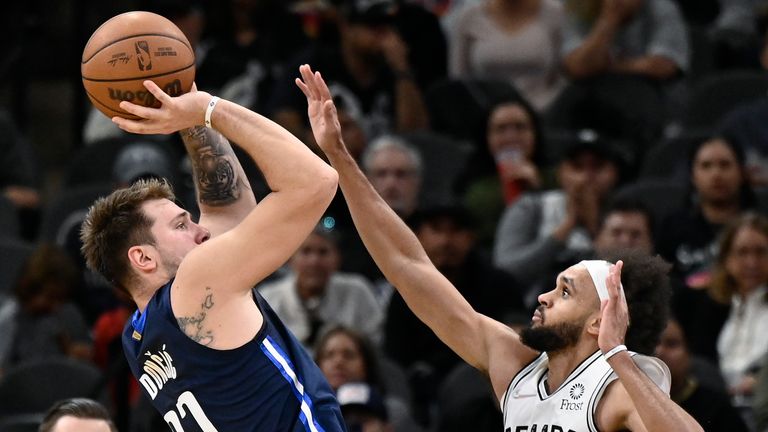 Jalen Brunson scored a season-high 31 points, including 13 of Dallas’ final 15 of the game, and grabbed 10 rebounds as the visiting Mavericks outlasted the San Antonio Spurs 109-108.

The score was knotted at 96 with 3:50 to play before Brunson reeled off a three-point play and another jumper to put the Mavericks up 101-96.

San Antonio pulled within 103-102 on a bucket by Dejounte Murray with 51.7 seconds remaining, but Brunson stayed hot, hitting a step-back jumper and then two free throws.

With the Mavericks up 109-108 with 2.7 seconds to play, Brunson missed two free throws, giving the Spurs a chance for a winning shot. Dallas’ Dorian Finney-Smith stole the ensuing pass from Keldon Johnson to secure the win for the Mavericks in the second game of a home-road back-to-back. Dallas had lost to the visiting Miami Heat on Tuesday night. 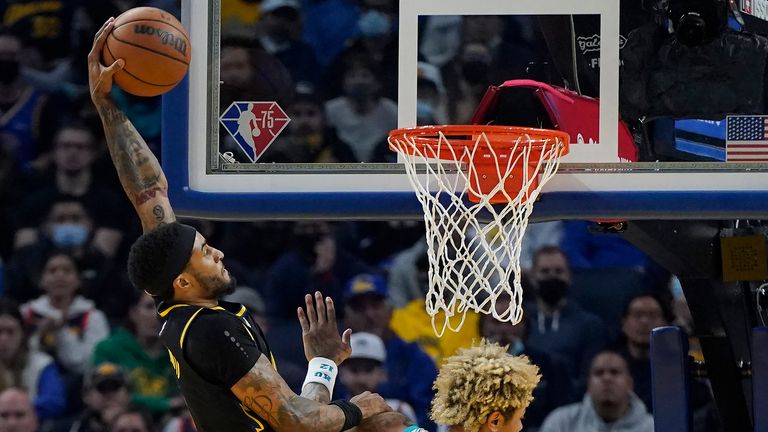 Check out the top ten plays from Wednesday night in the NBA.

Luka Doncic scored 23 points and pulled down 12 rebounds for Dallas. Tim Hardaway Jr. also had 23 points, and Boban Marjanovic hit 17 off the bench.

Paul George continues to lead the way for the Clippers 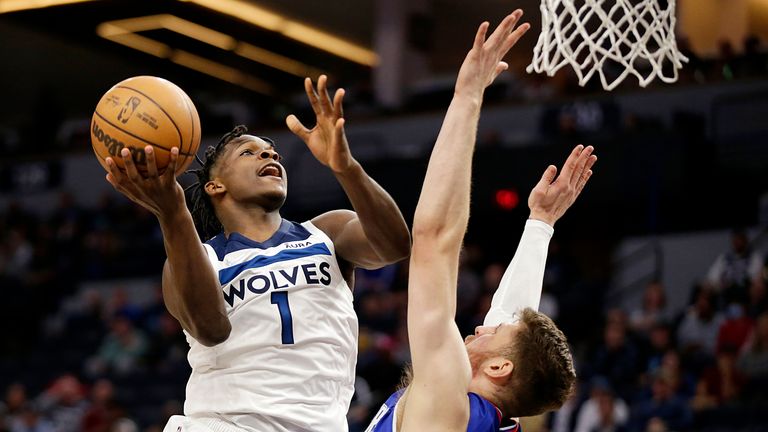 Paul George finished with 32 points, six rebounds and eight assists as the Los Angeles Clippers held on for a 126-115 win over the Minnesota Timberwolves in Minneapolis.

Reggie Jackson added 29 points and eight assists for Los Angeles, which earned back-to-back victories for the first time this season. Nicolas Batum scored 20 points on 7-for-10 shooting, including 6 of 8 from beyond the three-point arc.

The Timberwolves closed the gap to 118-113 on a driving layup by Edwards with 3:19 remaining but the Clippers answered with three-pointers by Batum and Jackson to increase their lead to 124-113 with 1:31 left. Tyrese Haliburton added 20 points, De’Aaron Fox scored 19, Richaun Holmes, Alex Len and Davion Mitchell had 12 each and Buddy Hield had 11 for the Kings, who beat the Pelicans for the second time in six days.

Devonte’ Graham and Nickeil Alexander-Walker scored 16 points each, Jonas Valanciunas had 14 points and 11 rebounds, Kira Lewis Jr. scored 14 and Garrett Temple had 12 for the Pelicans, who lost their fifth game in a row.

The visitors committed 17 turnovers while the Kings gave the ball away just eight times. New Orleans were playing without stars Zion Willamson and Brandon Ingram.