Watch the Italian Grand Prix live on Sky Sports F1 on Sunday at 2pm, with build-up from 12.30pm 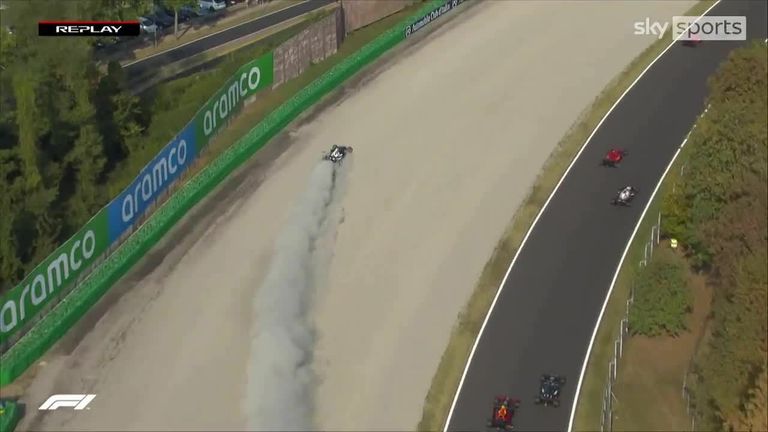 Lewis Hamilton dropped from second to fifth during the first lap of the F1 Sprint at Monza, while Pierre Gasly crashed out of contention

Lewis Hamilton dropped from second to fifth during the first lap of the F1 Sprint at Monza, while Pierre Gasly crashed out of contention

Max Verstappen will start the Italian GP on pole despite finishing behind Valtteri Bottas in Saturday’s F1 Sprint, as Lewis Hamilton’s horror getaway cost him three places and vital title momentum at Monza.

Bottas officially won F1’s second-ever Sprint after 18 laps of drama, but has an engine penalty for Sunday’s race and so will drop to the back of the grid – handing championship leader Verstappen an unexpected pole.

Hamilton was the favourite to be in that position come the chequered flag, but the Mercedes driver was left ruing a poor start that dropped him from second place to fifth, as Verstappen and the McLarens came charging past.

Pierre Gasly also got ahead of Hamilton before heavily crashing out with front-wing damage, causing an early Safety Car.

After that, Hamilton relentlessly put pressure on Lando Norris, with DRS, but just could not get past his young British compatriot.

Verstappen finished a couple of seconds behind Bottas, but takes two points for finishing second to increase his championship lead to five points, while Daniel Ricciardo also collected a point after bringing his McLaren home in third.

He will start Sunday’s race – live on Sky Sports F1 at 2pm – on the front row behind Verstappen, while Norris and Hamilton will form the second row.

Charles Leclerc overcame sickness to finish sixth for Ferrari ahead of team-mate Carlos Sainz, who had his own pre-Sprint worries after heavily crashing his car in Saturday’s earlier practice.

They were followed by Antonio Giovinazzi in the Alfa Romeo, who expertly held off Sergio Perez in the other Red Bull.

Perez had earlier tussled fiercely with Lance Stroll, having to cede position after an illegal overtake at the first chicane.

*starting at the back of the grid due to engine change

In a mini race that sets the grid for Sunday’s all-important Grand Prix, drivers knew that not making mistakes would be vital. But that’s exactly what Hamilton did come lights out, ruing another bad start in the Sprint.

Just as Hamilton got away slowly from the front at the format’s British GP debut – which Verstappen won – the seven-time champion didn’t start cleanly at Monza, then seeing Verstappen and Ricciardo move alongside and past him on the left, before Norris came through on the right into Turn 1.

In a normal race, perhaps that error wouldn’t have been so costly, but with only 18 laps of the sprint it was always going to be hard for Hamilton to catch back up to title rival Verstappen, and in the end he couldn’t even pass a McLaren.

Norris parked his car in all the right places to, not for the first time this season, frustrate Hamilton, right up until the chequered flag. Lewis Hamilton was frustrated with his poor start after finishing fifth in the Sprint race at the Italian Grand Prix.

Lewis Hamilton was frustrated with his poor start after finishing fifth in the Sprint race at the Italian Grand Prix.

It leaves Hamilton in a position of weakness on a weekend where Mercedes were expected to dominate Red Bull, who they have been around half a second lap quicker than around the high-powered track.

“We lost a lot of points,” said Hamilton. “Got to try and figure out how I can get by the McLarens tomorrow, and try to limit the damage.”

He added: “You saw the pace of the Red Bull. I don’t know if he was quicker than Valtteri but they’re so fast, and now he’s on pole. So it should be an easy win for him.”

Verstappen was certainly the big winner from Saturday, and will hope to extend his title lead back into double digits on Sunday.

Gasly, meanwhile, has to go down as the big loser.

The Frenchman, a shock winner at Monza last year, started sixth and moved ahead of Hamilton around the outside, but pivotally damaged his front wing after touching the back of Ricciardo’s McLaren. Soon after, he went speeding off into the barriers.

He will start at the back in Sunday’s Italian GP. Expect the unexpected.