In January this year, Harlequins found themselves sitting in the lower reaches of the Gallagher Premiership table, without a director of rugby following Paul Gustard’s departure and with seemingly no chance of even thinking about reaching the final across the road at Twickenham.

However, a run of 10 wins in 14 games propelled them into the semi-finals, where Quins then fought back from 28-0 down to topple league leaders Bristol Bears followed by outlasting reigning champions Exeter Chiefs after another stirring comeback to triumph 40-38 and lift the title.

The genesis of being crowned Premiership champions for the first time since 2012 in the most unlikely of circumstances lay in the decision to adopt a different approach during the depths of winter – thanks, in no small part, to data obtained from microchipped gumshields worn by the players.

Originally brought in to aid player welfare, Quins found there were huge performance benefits to be reaped from the PROTECHTPro system, which measures contact load, as well and the decision to reduce contact by around 50 or 60 per cent of the Premiership average but increase intensity in training to perfect their expansive style of rugby has reaped dividends.

“It allowed us to be more free-flowing in our training, that we could have more open, expansive and almost conditioned game-style rugby,” Harlequins head of medical Mike Lancaster told Sky Sports.

“We’re training at higher intensity, but we looked at the reduction in contact density in the week – but we still want to make sure we absolutely get a small block of match-specific intensity.

“We can still hit our technical, tactical and match-play situations the coaches want to see, and the players need, but we take out in the whole week the density of contact and just have these small blocks.”

Quins train at around 90 per cent match intensity, but with contact tailored both on a position-specific and individual basis depending on what their load has been in the previous week. On average, players will have 24 contacts per week compared to as many as 40 elsewhere in the Premiership.

Those impacts are in turn classified as low, moderate or high, with 70 per cent rated low, 25 to 30 per cent rated moderate – the aim for when training at match intensity – and outliers drifting into high are zero to five per cent.

It is a similar story over at Gloucester, who are still in the early stages of utilising the PROTECHTPro technology, where head of medical services Eoin Power and his team are collaborating closely with head coach George Skivington and his staff to put together an extensive bank of training drills which have player welfare and contact load management at the heart of them without compromising in-game performance.

“If they can get the same rugby result in a drill or a training session which produces less head contact, they are going to definitely do that – and we have got the data to show them which are the safer drills to do, and they have been really, really keen and receptive to do that,” Power told Sky Sports. 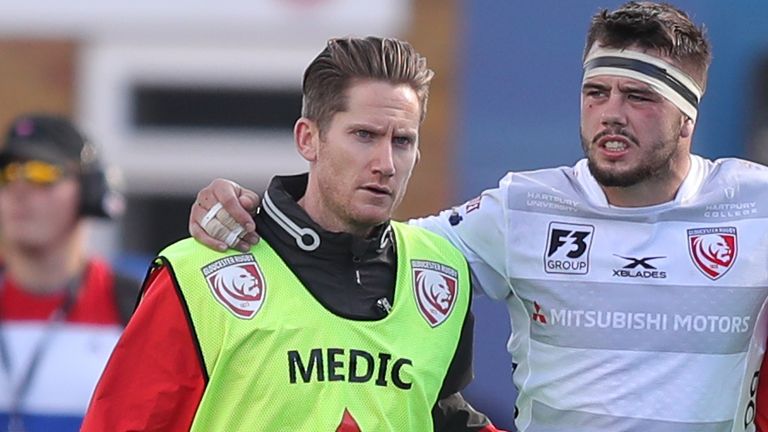 “Anything they can do which is going to improve player welfare – and it’s not player welfare as an individual improvement, it’s the overall skillset, performance and it’s all interlinked. That’s why I think it’s been such a useful tool because it’s interlinked to everyone in the club.”

The technology works by measuring the movement of an individual’s head via a gyroscope and accelerometer embedded in the gumshield, and in-game data is transmitted in real time to the sidelines too.

That, in turn, allows Lancaster and Power to flag up any unusual readings immediately and check anything which could have been missed from the variety of camera angles the medical staff have at their disposal, giving a far more objective analysis of potential head injuries to traditional methods.

The gumshields have been developed over several years by Sports & Wellbeing Analytics (SWA), who wrestled with how to get all this technology into bespoke individual OPRO gumshields as well as having to wrestle with unexpected issues like fillings in some players’ teeth blocking transmission.

It is marketed as a performance device rather than a medical one, but SWA CEO Chris Turner has seen how Harlequins and Gloucester, as well as clubs they work with in the United Rugby Championship and rugby league sides St Helens and Salford Red Devils, are empowering their medical staff with this data – particularly at a time where the long-term effects of repeated concussions are becoming more and more apparent.

“If we can put measurements and a scale to that with the ways they have done with GPS, we are in a position to start making equivalent judgements which say: ‘You’ve done too much high-speed running and you’re in danger of a groin strain, as a precautionary measure we’re going to take you off’,” Turner told Sky Sports.

“Now, you have got information which allows you to make the same sort of precautionary decisions based on contact load as well as running. In rugby, that’s really, really key because running injuries in rugby are there, but contact-related injuries are much, much higher – and I’m not even talking about concussion, just muscle damage and this kind of stuff.

“That’s the kind of thing you can start to think about as you move forward and because it’s all in real time, you can see it.”

Success in rugby is naturally measured by results on the pitch, with Harlequins currently second in the table after four matches in the new Premiership season and Gloucester already showing improvements from the 2020/21 campaign where they finished 11th.

For Lancaster and Quins’ medical and performance department though, success is defined by availability and wellness of players and it is a similar story at Gloucester, where Power is delighted with how the entire squad have bought into the benefits of this technology.

“Everybody’s objective here is to make sure the player is fit, well and performing, and this tool is another area we’ve uncovered in the last couple of years which is helping us achieve that,” Power said.