Maguire, who has come in for some criticism for his Manchester United performances this season, opened the scoring inside 10 minutes, before Harry Kane scored a first-half hat-trick and also set up Jordan Henderson as Albania crumbled at Wembley.

After nodding home Reece James’ free-kick, Maguire celebrated with a knee slide, cupped his hands to his face and put his fingers into his ears, drawing a scathing response from Keane.

“I think he puts his hands to his ears like he’s shut the critics up, but I think that’s embarrassing,” the Sky Sports pundit said on ITV. 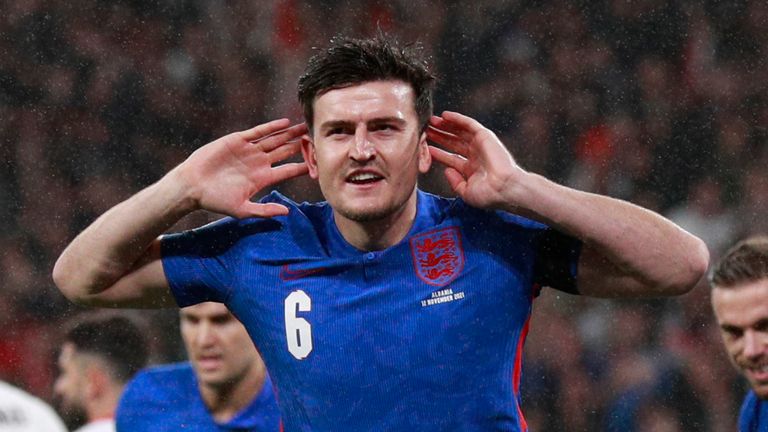 Maguire, speaking after the game, was adamant his gesture was not aimed at anyone in particular.

He told Sky Sports News: “It was a great ball from Reece. We’d worked on it, we knew the areas we could exploit and credit to all the staff for doing that. I managed to direct the header into the far post and I think when you play these games, the first goal is crucial and it comes quite a lot from set-plays. We knew we’d get a lot of set-plays and we had to be clinical with them.

Southgate added of Maguire’s celebration: “Is he a Hulk Hogan fan? I don’t know what the celebration was for. He’s a fabulous player, two months ago he was in the Euros team of the tournament.

“He’s rushed back because he’s the sort of player who has a huge conscience to help his club. You get lots of players who hide in the treatment room when pressure is on. He hasn’t done that and I have massive respect for that but you can go into matches not fully fit and you’re judged as fully fit in those moments.

“I’ve had a good chat with him this week, reminded him how important he is for us, he’s been able to switch focus and have a few days on the training pitch which has probably helped, and his performance was very good.”

Southgate: First half best we’ve played for a long time

The Three Lions were unable to extend their lead in the second half but the win leaves them needing just a point from their trip to San Marino on Monday to qualify as Group I winners and seal their spot at the 2022 World Cup.

They will be hoping for another big goal haul to finish off a successful 2021 in style and Southgate said England’s first-half performance against Albania was “the best we have played in a long time”.

Reflecting on the game, Southgate said: “The first half was fantastic, as well as we’ve played for a long time. It’s always difficult to maintain that when you’re so far ahead, there’s so much adrenaline just before half-time. We were still professional in the second half, but unfortunately we couldn’t give the crowd more goals.

“I think we’re best when we have an edge. We didn’t produce what we should against Hungary and we wanted to put that right. We had a game tonight to put us on the verge of qualification for a World Cup, it’s as simple as that.

“Tonight we were too athletic, too strong and our quality with the ball in the first half – bar two or three errors which could have been more costly – the first half was very good football. We were very composed playing through pressure of the opponents and we were creative in the final third. We created more chances than we scored.

“We’ve got to put on a performance [against San Marino] that is aligned with how we’ve approached the whole year. I think we’re 18 games this calendar year and the one loss was on penalties, so in terms of our confidence and belief in what we’re doing during matches, we’ve been in a really good position and we’ve got to continue that.

“We have to go there and put in a performance that finishes the job and gives everyone something to enjoy internationally going into Christmas.” 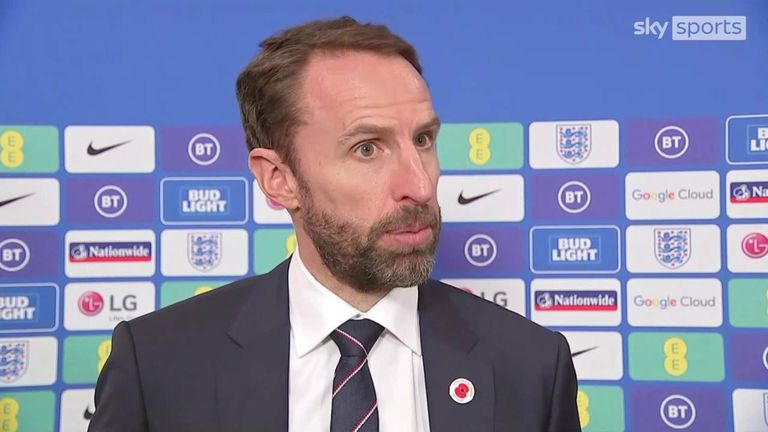 The victory comes amid news of a reported new two-year contract for Southgate, although the manager gave little away as to whether an announcement was imminent.

He told ITV: “We need a point. We’re not done and it would be wrong for my attention to be anywhere else but that. My job is to get this team into a World Cup and then we can look at everything else after that.

“It’s an irrelevance for me. I’m under contract, I’m not out of contract and I’m very well supported here, I’ve said that all along. My focus is just getting this qualification done and everything else can wait.”

When asked by Sky Sports News if he was still enjoying being manager of England, Southgate said: “Absolutely. We’ve got some fabulous players to work with and we’re a competitive team. Those opportunities in life don’t come around too often so I’m hugely proud to do the job and I’m massively proud of the performance tonight.”

Kane: I could have had six on another night 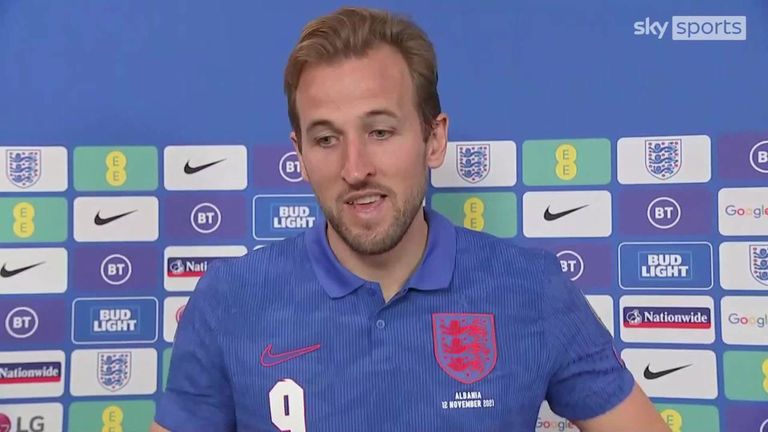 It was another night of milestones too for Kane. He scored the perfect hat-trick, and went level with Jimmy Greaves in England’s all-time scorers list. He also pulled two goals ahead of Wayne Rooney for competitive goals scored for England.

“It’s a nice achievement to reach,” he told Sky Sports News. “All those individual [records] are bonuses along the way. It’s a proud moment, but we keep on going.

I thought he gave a brilliant centre forward’s performance tonight. He competed, he held the ball up, he played other people in and of course, his finishing was outstanding. I thought his all-round game was excellent. His record for us is phenomenal and he’s such an important player for us.

“I think it was the first one [a perfect hat-trick for England]. I’ve had one for Spurs before, it was nice to finish that one with a good finish at the end there.

“It’s a nice landmark to hit. We all know how good Jimmy was, so whenever you’re put into those conversations and you’re doing stuff they’ve done, it’s a great personal achievement. It’s a nice one to go level with and hopefully one day I can go ahead of him.”

Reflecting on the victory against Albania, Kane added to ITV: ““It was an incredible performance really. Perhaps we knew a little bit that we needed to get this result today, coming off the back of the last camp as well, we didn’t finish how we wanted to so can’t credit the lads enough. A great way to get closer to qualifying.

“Whenever you put on an England shirt, you want to do everyone proud. We maybe had a little point to prove after the last game, we didn’t perform to the standards that we know we can so everyone was ready for this one. As you saw, we came out on fire and got the three points.

“Whenever I get chances, I feel like I’m going to score. There was quite a few out there today, I could’ve had six on another night. I’ll just keep doing what I’m doing, keep working hard for the team and let’s keep winning.”

After a dominant performance from England, Sky Sports pundit Roy Keane predicted more good days ahead for Southgate and his side, with the manager facing some nice problems in the coming year.

He told ITV: “You felt like England were in the zone. They might have been disappointed with the last one or two performances and as soon as they got that first goal, it was game over.

“Gareth has got high-class problems. There was a bit of a negativity with some of the senior players, hangover maybe from the Euros, not playing that well at club level.

They were full of confidence. There were players like Sterling, who doesn’t play a lot for Man City at the moment, but Gareth also shows a lot of confidence in him. He had a really good game, I think they all played really well… you have to give them a lot of credit. Albania didn’t really ever possess any kind of threat. With England, people expect them to completely annihilate teams all the time. The fans were there, they were out in force and the Albania fans too, it was a good atmosphere. It was a really good, positive performance.

“But there’s lots of pluses for England. They’ve controlled the group from day one, they were always going to qualify.

“Kane scores a hat-trick tonight, a couple of set-pieces which they’re always good at, some brilliant young players coming through, playing week in and week out for some big clubs.

“Good days ahead for England, I think.”

What is the World Cup format and schedule?

The 2022 World Cup in Qatar will feature 32 teams in eight groups of four.

Four matches will be played each day during the group stage, which will run over a 12-day period and see winners and runners-up progress to the round of 16.

Matches will only be assigned to particular venues after the finals draw, so organisers can choose optimal kick-off times to suit television audiences in different countries, as well as supporters out in Qatar.

The finals draw is scheduled to take place in April 2022, after the March window for international fixtures.

Unlike at Euro 2020, there will be a third-place play-off game on December 17.

When will the matches kick off?

Kick-off times in the final round of group games and knock-out round matches will be at 6pm and 10pm local time (3pm and 7pm UK time).

What are the venues?

The Premier League has confirmed key dates for the 2022/23 campaign, with the season adjusted to accommodate a World Cup that takes place in the middle of the domestic calendar.

The season will start a week earlier than normal on August 6 2022, with 16 matchdays taking place up to the weekend of November 12/13, before the tournament kicks off on November 21.

The Premier League will resume on Boxing Day following the World Cup final, which takes place on December 18.