The £550,000 tournament continues on Tuesday – live on Sky Sports Arena from 7pm, where the fate of players in Groups E-H will be decided, including Fallon Sherrock as well as the blockbuster clash between Raymond van Barneveld and Gary Anderson

World No 1 Gerwyn Price suffered a rare defeat at the Grand Slam of Darts, while James Wade conjured up a vintage display and Jonny Clayton also made it through to the knockout stages with a third consecutive group win.

Price was beaten by Martin Schindler, while James Wade averaged 112.98, hitting four 180s and a 121 checkout to defeat Rob Cross in one of the performances of the night, and Jonny Clayton topped his group with three wins from three to continue his stunning year.

Next generation stars Nathan Rafferty and Bradley Brooks also booked their spots in the last 16.

Schindler stuns Price; No 1 still through with Rafferty

The world No 1 was hoping to make it three wins in Group A when he faced Schindler, who was unable to qualify.

Price, the two-time champion, looked on course to making light work of his opponent after opening up a 3-1 lead. But the German landed finishes of 78 and 92 to level it up a 3-3. 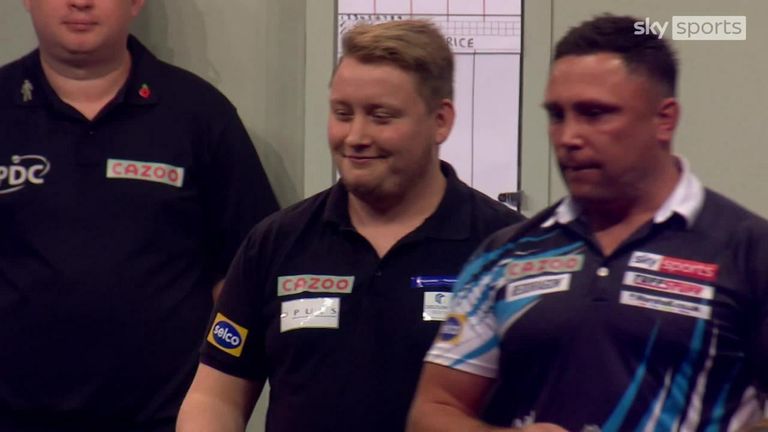 The Welshman found him in serious trouble when Schindler nailed double 18 to move ahead and he came close to a seismic shock when he missed tops for a spectacular 160. Price took out double 20 to send the contest into a deciding leg.

However, Schindler was not to be denied as he handed Price just his second defeat in 17 matches at the tournament with an 101.66 average to end his campaign on an ultimate high. 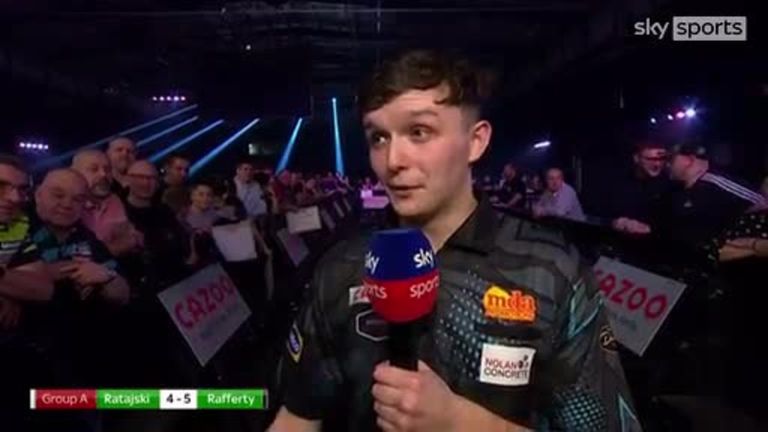 In a straight shoot-out between Krzysztof Ratajski and Rafferty, the Tyrone thrower knew a 5-1 or whitewash win would see him overtake Price and top the group.

Ratajski made sure that would not happen and sent the contest all the way. The world No 12 was left to rue six match darts in the end with 21-year-old Northern Irish star pinning double 8 to cause a big upset.

Clayton needed two legs to make it through, while Mervyn King had to win 5-1 or 5-0 to advance ahead of their big clash in Group B.

King gave it his best shot early on, but the Masters, Premier League and World Grand Prix champion found double 16 with his last dart in hand to make it 2-2 and send the 55-year-old out. 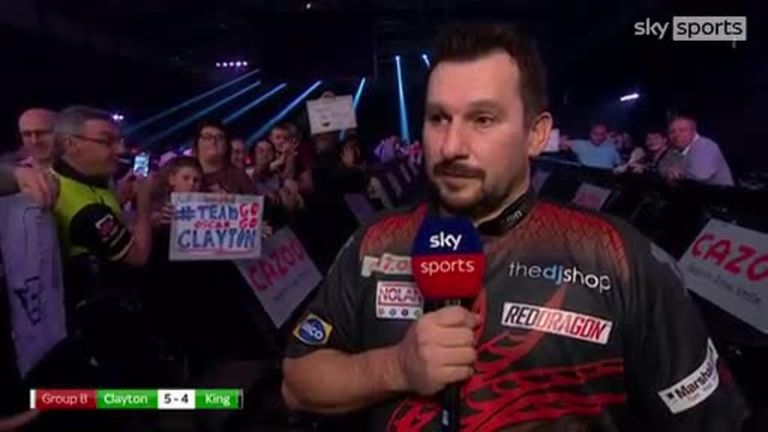 Clayton was thrilled after overcoming the experienced King

Clayton was thrilled after overcoming the experienced King

‘The Ferret’ and King smiled at each other as it went to a deciding ninth leg, but it was the man of the moment, Clayton, who survived two match darts to sink double 12 and top the group.

‘Bam Bam’ Brooks came into his match with Rusty-Jake Rodriguez knowing he would go through with a win, while the Austrian had to win 5-2 or better to keep his hopes alive. 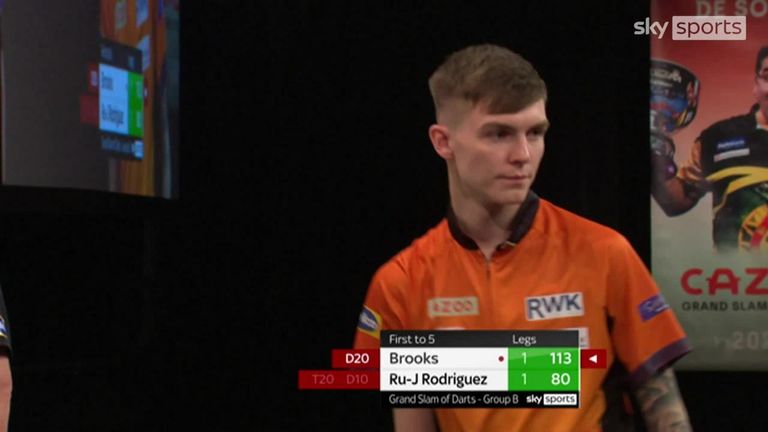 The two youngsters went at it hammer and tongs but it was 21-year-old World Youth Champion Brooks who impressed the most and he nailed a 113 finish on his way to a 5-3 triumph.

Tough game tonight but I got the job done 🤞- over the moon to get through the group stages on my debut in the @OfficialPDC GSOD. Day off tomorrow and cannot wait for Wednesday – thankyou for all the support 👏👏 #RWK pic.twitter.com/pobnAt7xm3 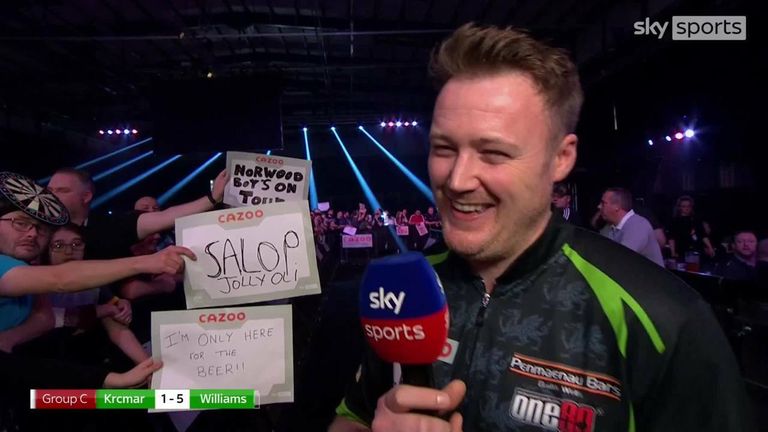 Underdog Jim Williams knew a win would provide a major boost to his hopes of making it out of the group.

He pinned tops for an 111-out to move 2-1 up before adding to Boris Krcmar’s woes by reeling off the next three legs for a comfortable 5-1 win. That victory piled the pressure on James Wade ahead of his match against Rob Cross, who required one leg to make it through. 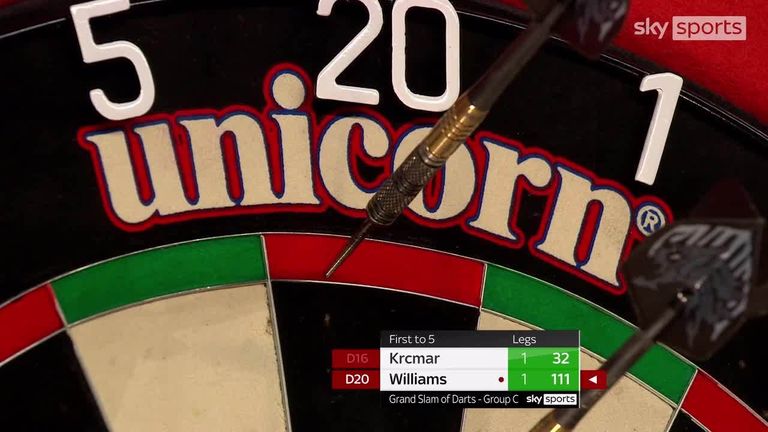 Wade, the fourth seed and three-time runner up at the event, made a storming start. He began with a 12-dart hold of throw – a magnificent 121 on the bullseye – and he wasn’t planning on hanging around after sinking tops in legs two and three to pressurise ‘Voltage’. 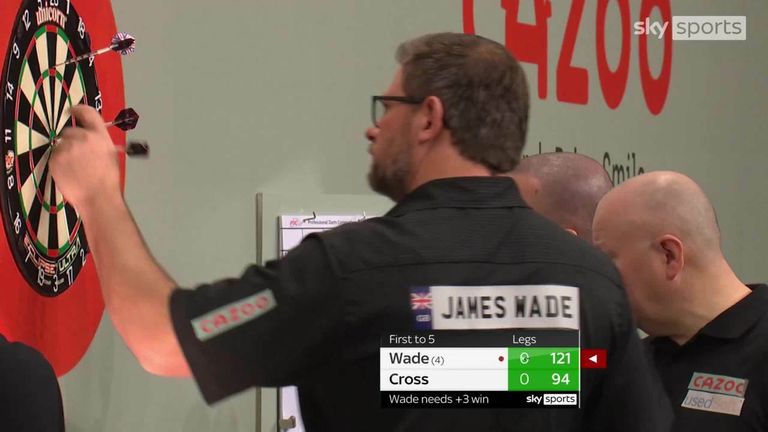 But former world champion, Cross, eventually stumbled over the line after pinning double 3 to make the last 16 and Wade joined him in the knockout phase by completing a superb 5-2 victory to eliminate Williams. 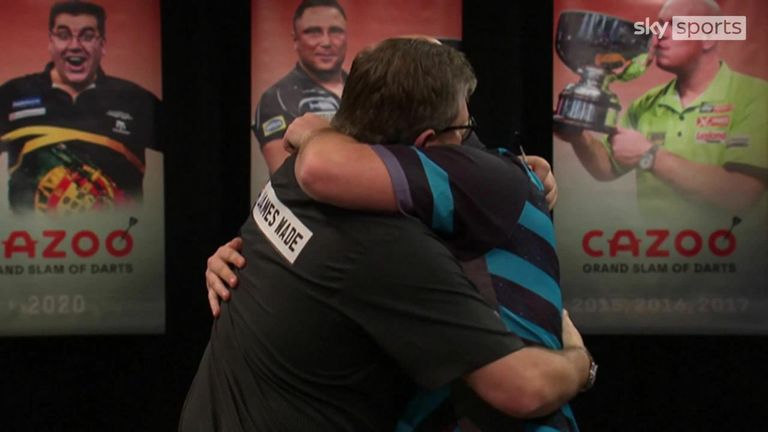 RJR runs riot to join Joyce in next round 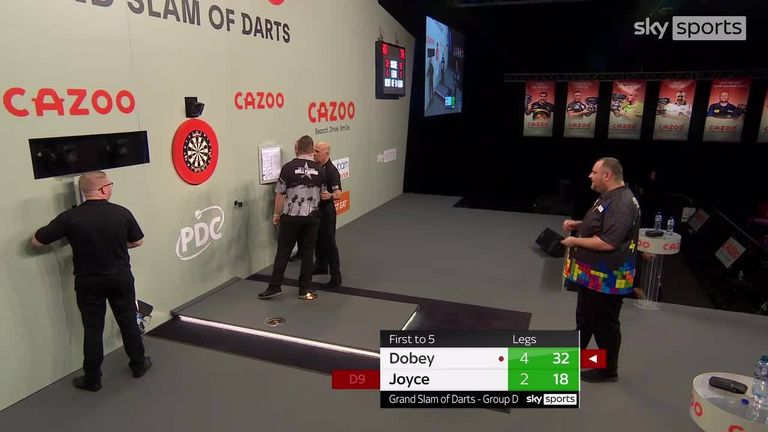 Game, Shot, and… NO SCORE! Referee Russ Bray made two game shot calls in the same leg but Dobey eventually got the job done

Game, Shot, and… NO SCORE! Referee Russ Bray made two game shot calls in the same leg but Dobey eventually got the job done

Chris Dobey bowed out of the tournament on a high after a 5-3 win over Ryan Joyce with a 97.8 average.

Joyce made a superb start by taking out out 101, but ‘Hollywood’ landed the first maximum of the match and double 16 to move 4-2 ahead before settling the contest to win the battle of the North East. 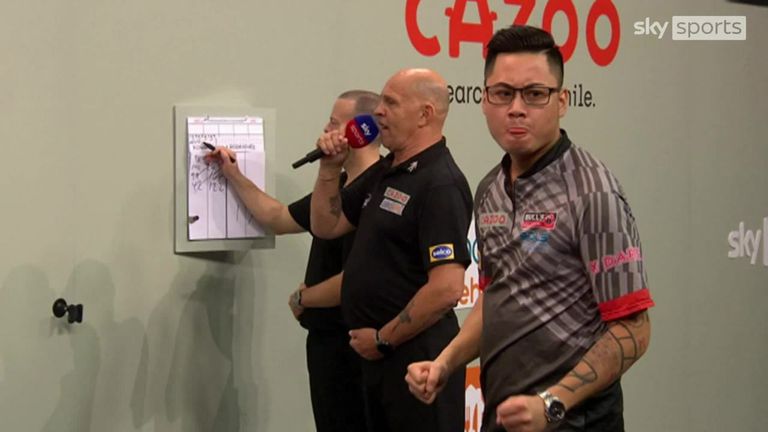 That defeat for Joyce opened the door for Stephen Bunting to potentially top Group D. He sat in pole position, but the St Helens’ thrower ran into Rowby-John Rodriguez, who averaged 104.82 to record a stunning 5-1 success.

‘Little John’ dazzled after losing the opening leg to win five legs on the spin – including a magnificent 122 checkout.

Don’t miss a dart from the Grand Slam of Darts which continues on all week from Wolverhampton’s Aldersley Leisure Village – join us from 7pm on Sky Sports Arena on Tuesday night. Check out daily Darts news on skysports.com/darts, our app for mobile devices and our Twitter account @skysportsdarts