Sherrock defeated Suljovic during her historic World Championship campaign almost two years ago; ‘The Queen of the Palace’ takes on the Austrian for a place in the Grand Slam quarter-finals, live on Sky Sports Arena & Main Event from 7pm

Fallon Sherrock’s World Championship triumph against Mensur Suljovic will forever be etched in darting history, but now ‘The Queen of the Palace’ is tasked with repeating the feat as she eyes a place in the Grand Slam of Darts quarter-finals on Thursday night.

Sherrock has forged a reputation for defying the odds and breaking barriers – evidenced in her historic win over the Austrian at Alexandra Palace in 2019.

For the first time since that famous night in the capital, the pair will lock horns on the big stage in Wolverhampton, but will the Fallon fairytale continue?

The 27-year-old added to her history-making exploits with a sensational match-winning 170 checkout against Gabriel Clemens on Tuesday, recovering from 3-1 down to become the first woman to progress through the group stage in Grand Slam history.

Just 48 hours earlier, Sherrock whitewashed Mike De Decker with a 101.55 average – the highest recorded by a female player in a televised event.

“I don’t get caught up in all the hype. I can’t afford to get distracted by it. When I put my glasses on I just go into my ‘darts zone’. I’m like superman,” Sherrock said.

“I’m very excited about my next game, it will be special. It will be different to when I played Mensur at Ally Pally because it’s a different format here.

“Who knows what is going to happen, but I’m going to keep my head down, focus and hopefully I can produce my best game.”

Suljovic was on the periphery of the world’s top 10 before succumbing to Sherrock at Ally Pally, but while he’s since slumped to world No 28, ‘The Gentle’ is enjoying a resurgence; underlining exactly why he’s a major televised winner. 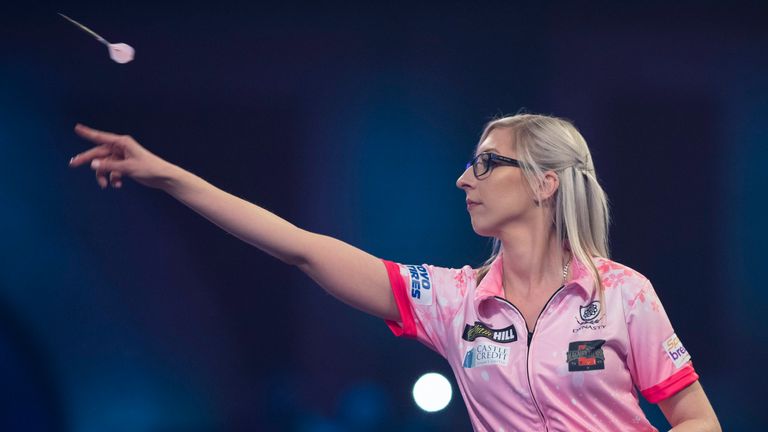 Thursday’s showdown offers Suljovic a shot at redemption, yet the bigger the occasion, the better Sherrock performs, and Sky Sports pundit Wayne Mardle is expecting an enthralling contest.

“I believe the start of the game is really important for Mensur. He is a better player than Fallon Sherrock. I think that’s an absolute fact, but Fallon Sherrock makes Mensur panic.

“If Fallon can get a lead of 4-1 or 3-2 at the first break, then we will see what Mensur is made of, but he has come back really well because he was struggling to actually play darts before the World Cup. I think he will fancy his chances.”

While Sherrock’s bid for more history is dominating the headlines, there’s also the small matter of a last-16 clash between Michael van Gerwen and Gary Anderson.

‘The Green Machine’ has been in irrepressible form at the Aldersley Leisure Village – topping Group A with three successive wins and a tournament average of 104.84.

The three-time champion is still eyeing a first major title since his Players Championship Finals success last November, and over the elongated format, it could take something extraordinary to dethrone the Dutchman.

Grand Slam of Darts 2021: Thursday’s Second Round Order of Play

Anderson is capable of such heroics, however. ‘The Flying Scotsman’ maintained his staggering record of qualifying for the knockout phase in all 15 editions of the Grand Slam with a 103.88 average in a 5-2 win over fellow veteran Raymond van Barneveld.

The two-time world champion has made no secret of his affinity with this event, but Van Gerwen dominates the pair’s recent head-to-head record, losing just one of their last 11 meetings.

Anderson’s last major ranking win over Van Gerwen came at the Grand Slam back in 2018, although they also met at the same stage of last year’s showpiece, with MVG running out a comprehensive 10-2 winner.

Snakebite, Special One set for showdown

It is testament to the quality on show in Wolverhampton that a second-round tie between the world No 2 and the reigning Grand Slam champion is flying under the radar.

Peter Wright and Jose de Sousa have both been unconvincing in advancing to the knockout stages, but given their major pedigree, it would be remiss to dismiss their title chances.

‘Snakebite’ has endured an alarming slump since scooping the World Matchplay in magnificent style in July, and despite his bullish nature, there’s a lack of conviction about his comments and performances of late.

By the same token, De Sousa is searching for the blistering form that catapulted him to Grand Slam glory and a Premier League final on debut, but who can rally to reach the last eight?

The evening kicks off with a fascinating tie between two of the game’s most natural talents, as Michael Smith and Joe Cullen prepare to do battle.

Smith is still eyeing that elusive first major title, and having seen a number of his contemporaries make their big breakthroughs over the last 18 months, it’s his time to deliver.

‘Bully Boy’ defeated Anderson and Van Barneveld to top his group with a 100 per cent record, but he’s up against a formidable opponent in Cullen – featuring in his first Grand Slam knockout fixture.

‘The Rockstar’ has made considerable strides over the last 12 months and all the indications are that he’s on the cusp of achieving something special, but who will prevail in what promises to be an electric affair?

Don’t miss a dart from the Grand Slam of Darts which continues all week from Wolverhampton’s Aldersley Leisure Village – join us on Thursday night from 7pm on Sky Sports Arena & Main Event.