Eddie Howe will miss his first game in charge of Newcastle United after testing positive for Covid-19.

Assistant head coaches Jason Tindall and Graeme Jones will lead the team for the Premier League match against Brentford on Saturday in the absence of Magpies boss Howe, who was appointed as the successor to Steve Bruce earlier this month.

Howe will now self-isolate for 10 days in line with government guidance, which means he is also set to miss next Saturday’s trip to Arsenal.

“I’m very disappointed that I won’t be there with you all at St. James’ Park tomorrow, but it is incredibly important that I follow the guidelines and self-isolate,” Howe said.

“I’d like to reassure everyone that I feel fine, and while this is unwelcome news for me, I know it hasn’t derailed our preparations for what is an important game.

“I have been, and will be, in constant communication with my coaching team and the players, both tomorrow and during the week, and I know they will be giving everything on and off the pitch.”

Newcastle sit 19th in the Premier League, five points adrift of safety after the club’s opening 11 games of the season. 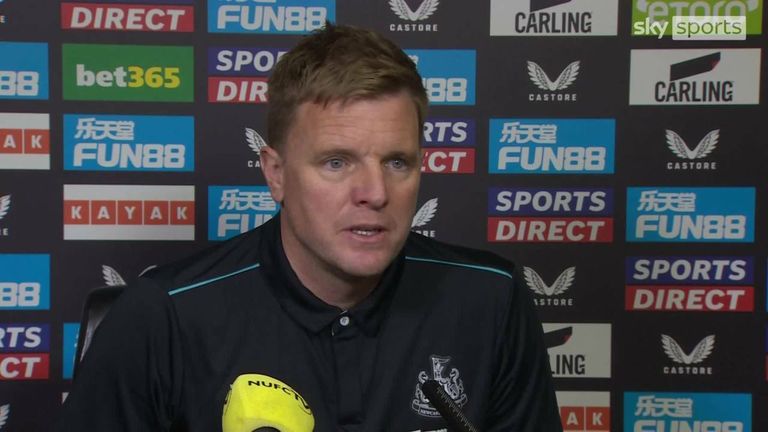 Earlier on Friday, Eddie Howe said he is trying to implement a new coaching philosophy with his players at Newcastle following his return to management

Howe has arrived at St James’ Park amid heightened focus at Newcastle following the Saudi-backed takeover of the club from Mike Ashley last month.

Speaking at his pre-match news conference prior to testing positive for Covid-19, Howe said: Howe said: “I have to separate myself from the noise because the noise isn’t going to help me in the job and my dealings with the players, so I think that’s going to be one of the most important factors for me.”

Newcastle managing director Lee Charnley has left the club as the new owners look to appoint a chief executive officer in his place.

Charnley, who has been at St James’ Park for 22 years, the last seven in the role he has just vacated, stayed on during a handover period following October’s Saudi Arabia-backed takeover.

A club statement said: “Newcastle United can confirm that its managing director, Lee Charnley, has left the club following a handover period with the new ownership group.”