Dallas Cowboys quarterback Dak Prescott continued his impressive return from injury, completing 23 of 27 passes for 237 yards (and an interception); Justin Herbert had his 10th 300-yard passing game, completing 31 of 41 throws for 338 yards, tossing one touchdown but also two interceptions

Greg Zuerlein connected on a 56-yard field goal as time expired to give the Dallas Cowboys their first win of the season, a 20-17 victory over the Los Angeles Chargers.

In a tight, low-scoring affair in Los Angeles, penalties proved decisive, particularly for the home team, as the Chargers were flagged 12 times for the cost of 99 yards – seeing a pair of touchdowns taken off the board as a result.

Chargers quarterback Justin Herbert had his 10th 300-yard passing game, completing 31 of 41 throws for 338 yards, tying the most by a QB in their first two seasons. He had one touchdown pass but also tossed two interceptions.

Cowboys QB Dak Prescott again impressed, completing 23 of 27 passes for 237 yards in the second game of his 2021 season comeback from injury, though he too tossed an interception.

Dallas enjoyed a great deal of success on the ground throughout. Troy Pollard ran for 109 yards on 13 carries for the third 100-yard game of his career, while Ezekiel Elliott would have 71 yards and a score on 16 carries.

After Chargers kicker Tristan Vizcaino tied the game with a 29-yard field goal with four minutes remaining, Dallas went 49 yards in 11 plays to get just about get into Zuerlein’s range, and he fired through the game-winning kick.

The Chargers hold an 8-17 record in one-score games since the start of the 2019 season.

After Pollard opened the scoring with a four-yard touchdown run on the opening drive, Herbert and Prescott traded in interceptions, before the Chargers got on the board with the first of three field goals for Vizcaino.

The Cowboys stretched ahead with a second rushing score – this time Elliott finding the endzone – to end the first quarter, but Los Angeles ate into that lead with a 12-yard touchdown toss from Herbert to Mike Williams and a successful two-point conversion. They couldn’t tie the game up at the half, however, as Vizcaino missed on a 44-yard FG try. 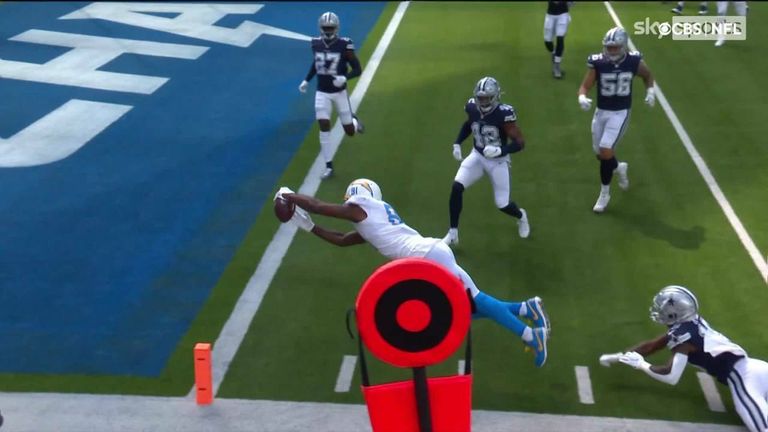 Mike Williams managed to dodge Anthony Brown and dive into endzone to keep the Chargers in the game against the Cowboys.

Mike Williams managed to dodge Anthony Brown and dive into endzone to keep the Chargers in the game against the Cowboys.

It was in the second half where errors really crept in for the home team. Late in the third quarter, with the score now level at 14 apiece, Herbert had a 37-yard scoring strike to a wide-open Donald Parham nullified when Jared Cook was called for a holding penalty.

Three plays later, Herbert was intercepted in the endzone by Damontae Kazee on a third-and-6 from the Dallas nine-yard line after Keenan Allen appeared to slip on his route.

In the fourth quarter, now trailing 17-14, the Chargers would have a Cook two-yard score scrubbed off the board for a motion penalty. L.A. would have to settle for a field goal to again tie the game up, though they left almost four minutes on the clock for Dallas to drive down the field and set-up Zuerlein’s game-winner.

It’s a couple of tough divisional clashes for both. The Cowboys host their NFC East rivals, the Philadelphia Eagles, on Monday Night Football next week, while in the AFC West, the Chargers travel to the Kansas City Chiefs on Sunday.