Bronte Law cards eight-under 64 to edge out Maria Fassi under the floodlights in Dubai; superb eagle at the 16th secures first Ladies European Tour success for Englishwoman; Law: “It’s a bit surreal right now. It’s been a while. At times I didn’t know whether I could do it” 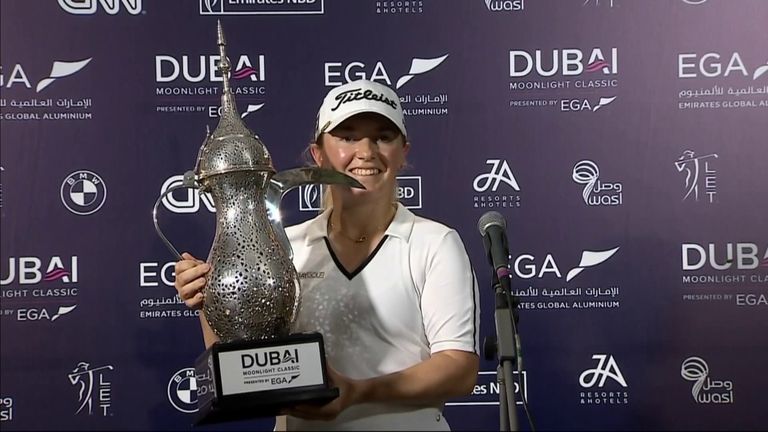 England’s Bronte Law produced a storming finish under the floodlights to win the Dubai Moonlight Classic presented by EGA at Emirates Golf Club.

The 26-year-old followed a run of four birdies in five holes with a brilliant eagle at the par-five 16th to leapfrog Mexico’s Maria Fassi and claim her first victory on the Ladies European Tour.

Law’s late surge gave her an eight-under 64 in the third and final round and took her to 15 under, one ahead of Fassi, who closed with a 68.

Fassi, who had shared the overnight lead with Jessica Karlsson, played the front nine in only level par but retook the lead from South Africa’s Lee-Anne Pace with a run of three birdies in four holes from the 10th.

Law, who opened up on the 18th in a shotgun start, had two birdies on the front nine and added a further gain at the 10th before knocking her tee shot at the 12th to around four feet.

An excellent bunker shot set up another birdie at the 13th and a fine approach into the 14th saw Law move alongside Fassi at the top of the leaderboard on 13 under.

Fassi was doing little wrong herself and she nosed ahead once again with a birdie at the par-five 16th, but Law, who spurned a birdie chance at the 15th, answered that by drilling her second shot at the 16th to around 10 feet to secure a crucial eagle.

The Mexican was unable to birdie either of the final two holes and Law, who won the Pure Silk Championship on the LPGA Tour in 2019, was able to afford a missed birdie putt from around four feet at the 17th after another dialled-in tee shot as she secured the title.

Law, who has struggled to regain her top form since 2019, was pleased to be a winner again but admitted it had been a tough road back for her as she struggled to overcome several issues.

She said: “I just went out there and was trying to post a number. I told my caddie yesterday ‘let’s go out and try and shoot seven under tomorrow’, and obviously I shot one better.

“It’s a bit surreal right now actually, but I’m just so happy to be back here. It’s been a while.

“[It has been] one of the hardest things ever. At times I didn’t know whether I could do it. This is my seventh week in a row and before I couldn’t even play three weeks in a row without struggling to get through, having back problems and just my body hurting like all the time.

“This is a testament. I probably wouldn’t have been here if I was still doing the same thing. I wouldn’t have been able to sustain that sort of volume of golf and I’m so glad that all the work is starting to pay off because it’s hard when things aren’t going your way.

“You feel like the world’s against you, but I’ve got a lot of people that have just stuck by me and I owe them a lot because it is the hardest thing in the world and I don’t think people understand how hard it is to be an athlete and the scrutiny that you are under. You question yourself at times and it’s so hard to pull yourself back through that. But I’ve just trusted the process and obviously it’s been working.”

Esther Henseleit of Germany closed with a 66 to claim third place on 12 under, with Pace (70) and Thailand’s Pajaree Anannarukarn (69) sharing fourth spot on 11 under.