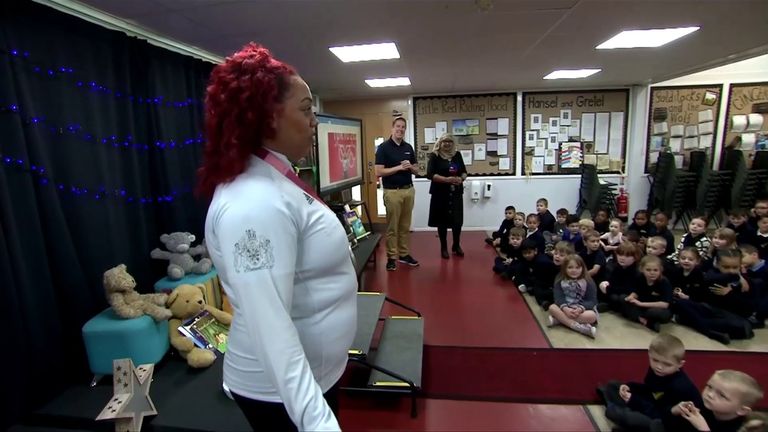 It all comes flooding back to Olympic heroine Emily Campbell when she returns to her old primary school in Nottingham.

It’s been more than 20 years since Campbell first attended Snape Wood Primary, and she comes back to the school as the second strongest woman on the planet after winning +87kg silver in Tokyo, and in the process becoming the first female GB weightlifting medallist in Olympic history.

As she walks through the school gates, one of the first things Campbell notes is that the uniform is still the same, but her eyes are fixated on the gymnasium where she developed a competitive edge from an early age.

“I have always have been so competitive since I was young, I always wanted to win,” she explains.

“I always wanted to be the best to play every single sport, like if I was going out to do tournaments…I was part of it and wanted to be captain. Basketball, football, whatever it was, I just wanted to play. And I continued that into secondary school and was exactly the same – annoyingly quite good at most things!”

The kids at Snape Wood Primary have been learning about inspirational athletes during Black History Month, and in Campbell many of the children now have a role model they can identify with and genuinely relate to.

But what inspired the one-time aspiring shot-putter to take up weightlifting in the first place, one pupil asks her during morning assembly.

“But then when I started weightlifting, I started realising I was stronger than most boys and it was really amazing. I’m the strongest in my gym regardless, and there’s lots of big boys there! I’m stronger than them, so that just made me want to carry on and be even stronger.”

Campbell describes herself as a big girl with a big heart, but she’s not afraid to speak up about the injustices she has faced and the racial barriers that Black people – particularly those in elite environments – continue to encounter.

Of the 65 medals Team GB took home from this summer’s Olympics, Campbell’s silver was among the most popular, with her red and blue hair providing one of the most striking podium images from the Tokyo Games.

For Campbell, it’s a proud symbol of her English and Jamaican background and she wears it as a badge of honour in tribute to heritage.

“When you see my hair on the competition platform, it’s not just my hair,” she tells the class. “It’s an expression of myself, my beautiful culture and what I love doing the most.”

Campbell has inspired both teachers and students at her old school alike, with Snape Wood head Mrs Chouhdhury explaining how her visit has made the children genuinely believe that they can follow in her footsteps by becoming an elite-level athlete.

“At Snape Wood Primary School, it is hugely important for children at the school get inspiration from local and national personalities, who have and are from similar demographics and have – or are still facing – challenges,” she says.

“Snape Wood Primary School is in one of the highest deprived areas in the country – children are faced with low aspirations and barriers.

“As part of BHM, it was important for us to focus on local personalities that have broken down barriers and have had the resilience to continue on the path of success. Emily Campbell and [footballer] Marcus Rashford have both been inspirational role models of success.

“Emily’s visit has not only inspired the staff but also has ignited the children’s aspiration to ‘have a go’, to keep persevering and to have self-belief. They’ve seen how a girl from this school was able to complete full-time education, graduate and self-fund her passion for weightlifting – and then follow her dream of one day becoming an Olympic medallist.

“The children were excited and in awe of Emily. The children were able to say ‘If Emily could do it – so can we’, ‘We will follow and build on our beliefs and use our Snape Wood pride and values of determination to succeed – no matter what!