Arsenal’s Beth Mead has been named the Women’s Super League Player of the Month for September.

The England international, 26, has enjoyed an impressive start to the 2021/22 campaign, registering three goals and three assists and helping the Gunners’ league challenge get off to a perfect start with five wins from five games.

Two goals in a 3-2 win over defending champions Chelsea in the opening game of the season were followed by another in the 4-0 victory away at Reading.

Mead also made it onto the scoresheet on international duty for England last month, netting in a 8-0 victory over North Macedonia in a Women’s World Cup qualifier. 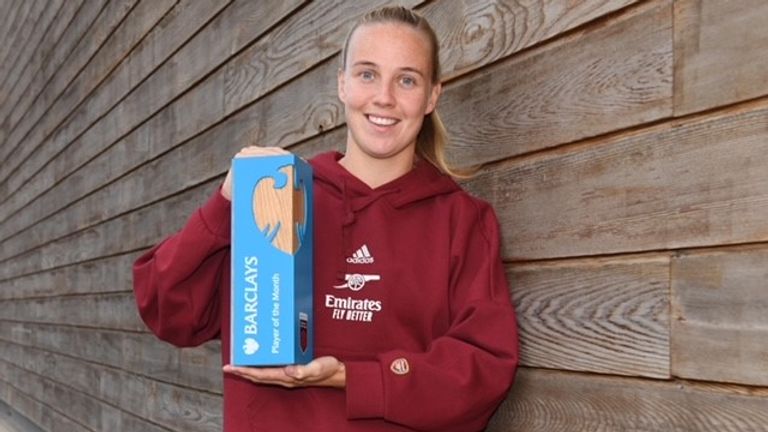 Mead has featured in all of the Gunners’ games this season and beat off an array of in-form nominees to scoop the award.

Mead told Sky Sports News: “Thank you for everyone who voted for me, I am honoured and these are the types of awards that you want to be winning individually.

“It means that my football is in a good place so I appreciate everyone who voted for me and against top, top opposition.

“I think I’m refreshed, obviously there was the disappointment of not going to the Olympics and I had the time off to find myself and my football again.

“I had my head on in pre-season I wanted to get my fitness levels up. I know I’ve got the ability to do things on the pitch but I needed to get my head screwed back on and came into this season feeling really good.

“I’m enjoying my football and that’s been showing.”

Reflecting on the summer additions of Tobin Heath and Nikita Parris and the competition for the forward positions in Jonas Eidevall’s squad, Mead said the new arrivals have helped improve her own performances.

“The strength in depth that we have is incredible,” she added.

“The last few seasons we haven’t had that and we’ve been unlucky with injuries… for me it’s been the best thing possible.

“A bit of competition has made me kick into another gear, I know that in training I’ve got to be doing the best possible things on the pitch and the competitiveness in training is a joke right now, but for me individually it’s made me better.”