Publishing company Emerald Group has put name to Headingley since 2017; will continue to fund stadium, which is also home to Leeds Rhinos; Yorkshire Tea ends relationship early while Tetley’s and David Lloyd Clubs will not renew partnerships

Emerald Group has ended its brand relationship with Yorkshire over the county’s handling of the Azeem Rafiq racism case, with other sponsors either following suit or seeking urgent talks.

The publishing company, based in Bingley, has had naming rights for Headingley, home of the county and Super League club Leeds Rhinos, since 2017.

A company statement read: “We have today taken the decision to remove our brand association with Yorkshire County Cricket Club and Headingley Stadium.

“We do not tolerate any form of racism or discriminatory behaviour and the damaging effects this has.

“Our intention remains to continue a financial commitment to the stadium itself, which is also the home of Leeds Rhinos rugby, as we believe this supports the aims of diversity and inclusion in sport along with a range of charitable community endeavours.

“Emerald will however no longer sponsor Yorkshire County Cricket Club.

“We hope that YCCC will listen and respond with serious action to eradicate racism from the club and uphold the values we all expect.”

Another significant sponsor – local brewer Tetley’s – announced its current deal with Yorkshire would not be extended.

A Tetley’s statement read: “As a brand we strive to be inclusive and to work with partners that share these values. We are deeply saddened by the ongoing conversation surrounding Yorkshire County Cricket Club following the recent investigation and report, and firmly believe further decisive action is required.

“As such, we have informed Yorkshire Country Cricket Club of our intention to not extend our official beer sponsorship with them beyond the end of the current contractual agreement. Discussions with the relevant parties remain ongoing given we have a valued 25-year relationship with Headingley Stadium and Leeds Rhinos, which also includes the recent addition of our brand sponsorship of Yorkshire County Cricket Club. We are proud of our investment in sport in Leeds through these partners and do not want the actions of one club to impact on others.”

Yorkshire Tea also confirmed on Wednesday that it was ending a deal with the county, which was due to conclude soon, with immediate effect.

A statement read: “We were upset to read about the experiences of Azeem Rafiq during his time at Yorkshire County Cricket Club. We wholeheartedly believe that cricket should be a sport for everyone, but his experiences and the way the panel report has been handled don’t reflect that.

“Our current partnership with YCCC was naturally coming to an end but we have taken the decision to end it with immediate effect.”

Local transport company First Leeds said in a statement: “We are concerned at the findings of this independent panel and are clear that we do not tolerate any form of discrimination. We are seeking to speak with the club at the earliest opportunity.”

“The partnership between our Leeds club and Yorkshire County Cricket Club was on a local level and was put on hold a few weeks ago. In light of recent reports regarding the treatment of Azeem Rafiq, it will not be reinstated.”

On Tuesday, Yorkshire’s chairman Roger Hutton was summoned to appear before a parliamentary Digital, Culture, Media and Sport committee as Rafiq’s account of what he alleges as institutional racism at the club reached senior levels of Westminster.

Rafiq has also been offered the chance to give evidence, with the earliest possible date for any hearing having been confirmed as November 16.

Former cricketer Azeem Rafiq will give evidence to MPs later this month regarding his allegations of racism at Yorkshire, as Sky Sports News reporter James Cole explains.

Former cricketer Azeem Rafiq will give evidence to MPs later this month regarding his allegations of racism at Yorkshire, as Sky Sports News reporter James Cole explains.

Health secretary Sajid Javid said “heads should roll” at Yorkshire as the pressure grew, and a spokesperson for Prime Minister Boris Johnson followed up Javid’s remarks by urging the England and Wales Cricket Board to “investigate this thoroughly and quickly” and “take action where needed”.

An independent report commissioned by Yorkshire previously resolved that Rafiq, who played for his home county in two stints between 2008 and 2018, had been a victim of “racial harassment and bullying”.

But Yorkshire, despite offering a full apology to their former player, stated that no employee – past or present – would face any further action.

The ECB has since apologised for not resolving the issue sooner. 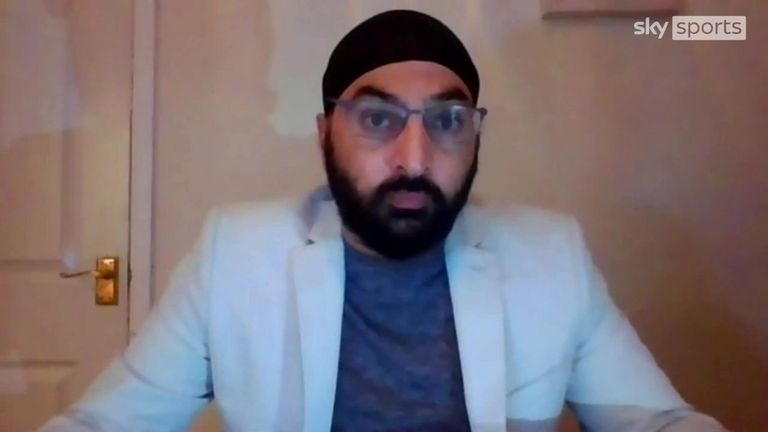 Monty Panesar says Azeem Rafiq must be given support, after Yorkshire confirmed it will take no disciplinary action against any of its employees following allegations of racism by the former player.

Monty Panesar says Azeem Rafiq must be given support, after Yorkshire confirmed it will take no disciplinary action against any of its employees following allegations of racism by the former player.

“Last week we received Yorkshire CCC’s report into the racism and bullying allegations Azeem Rafiq made against the club,” an ECB statement said.

“We are conscious about the length of time that Azeem has waited for resolution and the toll that must be taking on his wellbeing and that of his family. We are sorry that, as a sport, this has not yet been resolved.

“We will conduct a full regulatory process that is fair to all parties, but also ensure this happens as quickly as possible. To achieve this, we have secured the services of a QC, along with other external investigatory support to upweight resource around our process. The ECB Board has also reaffirmed its commitment to further additional resource, should the investigation require it.

“We are aware that The Select Committee have called Yorkshire’s Chair, Roger Hutton to give evidence. In the meantime, we will press ahead with our investigation.”